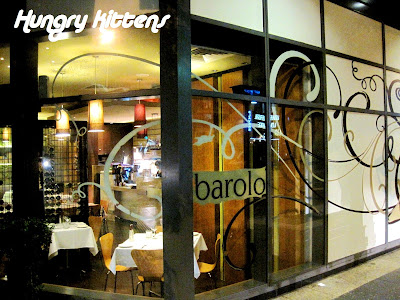 Many times when we need FOOD, I get confused and instantly forget the list of places I want to visit. Maybe I'll try physically writing a list...

Anyway, Barolo was an occasion when I actually knew exactly what I wanted. The criteria for the evening was: pasta in the CBD. Barolo describes itself as 'modern Mediterranean' and had some knock-out pasta dishes on their menu (yes, I research these things online). I was really eager to give it a go. 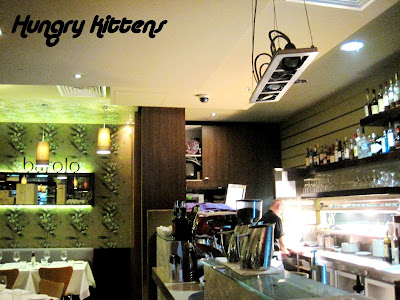 We got to the place nearly an hour before our booking but the staff were so gracious about it. Our table was in a little corner of the restaurant, sectioned off from the main dining area but a wall of wine. The restaurant has a businessy vibe, very open and clean but the warm colour scheme and plants saves it from being too intimidating. 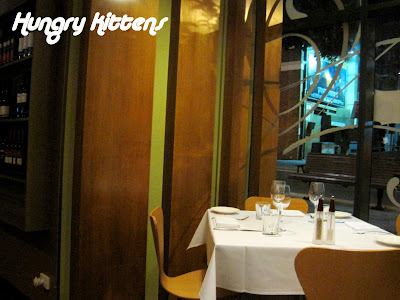 When we got handed our menus, we asked for some Turkish bread to start with. We were hungry and we also ordered 2 tapas plates as entrees: cheese croquettes and a quesadilla. Charlie and I also chose a pasta dish each as our mains. 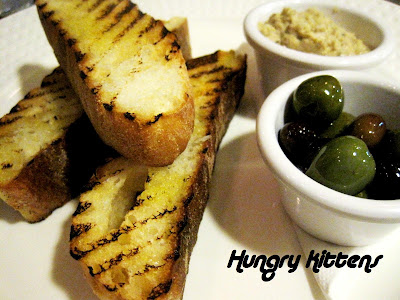 The bread came first and my first thought was "that's a pretty small pile". They gave us 3 pieces, which is unusual because there's 2 people. The bread is accompanied by green and black olives and a dip (I think it was eggplant). The dip was average but Charlie, who is an olive buff, commented that the olives were really tasty. We both thought the bread was slightly over-charred because it had a burnt flavor. 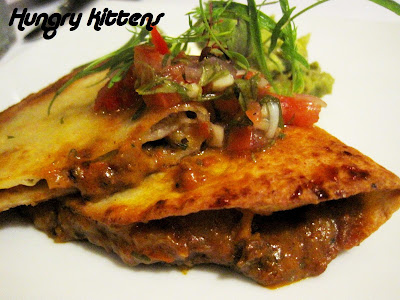 Quesadilla of spicy lamb and beef with an avocado crème fraiche

Entrees were next and again the servings were tiny. I tried the quesadilla first - strong flavors and very obviously Mexican. I think it was tasty but nothing you can't find at say, Montezumas for a lot cheaper. 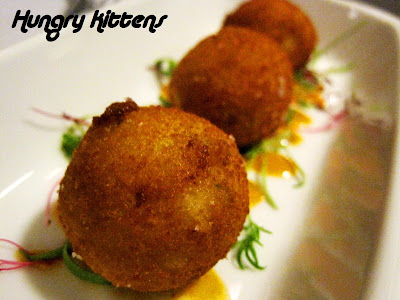 The cheese croquettes were crunchy and nice but also not very stand-out. If they were cheaper, they would make a decent side-dish or something to snack on. At nearly $10 for 3 little balls, you expect them to be more mind-blowing and they don't deliver. 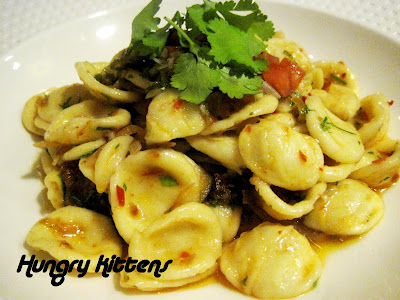 Fortunately for Barolo, their pasta dishes really pulled through. I had ordered their daily special which was an orreccetti (ear-shaped pasta) with shredded duck. The plate looked appealing as soon as it was brought out. The colours were vibrant and the whole dish just appeared fresh and inviting. It tasted amazing. This isn't a saucy pasta dish but the simple flavors and ingredients they used just popped in my mouth. There's no other way to describe it than 'alive' and absolutely delicious. Loved it!! (By the way, I just had a peak at the online menu and it's a dish on there now so maybe they made it a permanent option... horray!) 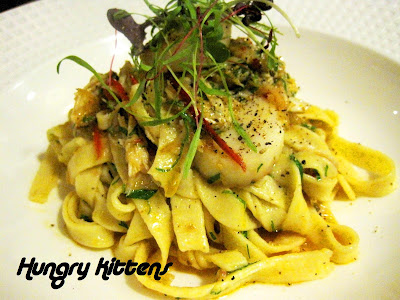 Charlie's been going through a phase of being addicted to chili crab pasta. He just can't get one that satisfies his craving 100%. At Barolo, he predictably ordered the ribbon pasta with scallops, crab, chili and garlic. I think that once again, it wasn't what Charlie wanted EXACTLY. He's after a creamy, saucy pasta like the one I got from Purple Olive (the one that probably triggered his obsession). This pasta at Barolo was again, not very saucy but it was also vibrant. There's a distinct lemony tang that cuts through the chili and seafood just wonderfully. I wasn't as crazy about this as my own duck pasta but it was still very good.

Barolo was a good experience overall. The atmosphere was great and the staff were just delightful. I thought the bread and entrees were a bit under-par for their price range but Barolo definitely redeemed itself with the pasta dishes. They are quite inexpensive and easily among the best I've had in Brisbane. I would go back there for that reason alone.
Labels: CBD and Surroundings, Dining Out, Informal Dining