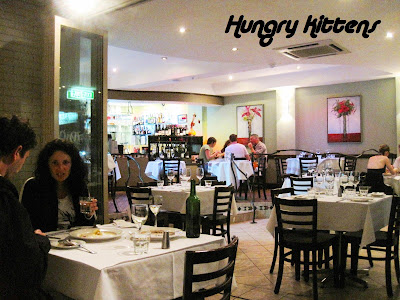 I've been in the mood for Italian food a lot. In a recent cookbook splurge, I picked up Jamie's Italy and the descriptions and photos are just stunning. I have dreams about pasta. It's incurable.

Being of Oriental heritage, I unfortunately don't have an Italian grandmother to lovingly create pasta dishes for me on a whim. The best I can do is make my own lazy versions (canned tomato + mince with store-bought dried pasta shapes and loads of Parmesan) or drag someone out to a restaurant with me. The someone is not strictly necessary but I'm not a huge fan of eating by myself.

As I was researching the supply of Italian restaurants in Brisbane, The Purple Olive came up a number of times. I had heard of the place before through a friend. I can't remember if she went or if she had a good time but assumed that if it didn't drill into my head, at least it wasn't any negative feedback.


We made a booking and drove off. Purple Olive is fashionably located on James St. Driving past means a quick perv and wishful sigh at the line of gorgeous fashion boutique stores on either side of the street. Enviable.

It's sale time... I can't afford temptation. I'm broke enough as is.

We're ushered inside by a nice waiter. I didn't get a FRONT SHOT of the restaurant because I was nervously crossing the street and someone (probably myself) had fiddled with the camera options. Anyway, the resultant photo had so much noise that it wasn't worth uploading. I could have taken another one on the way out but I always forget. Always.

The restaurant is small. Small indoors with a small outdoors area (just a few tables). It's not cramped though - reasonably spaced and contemporary yet 'homely'. I apologize if nothing I say is making sense... blame 3 days without decent sleep.

Now for the good stuff... the menu has a lot of pasta options (including gnocchi and risotto) plus some non-pasta mains. For starters, we ordered the pizza bread and grilled mushroom to share. For mains, I chose the sand crab and clam linguine and Charlie ordered the lamb shank. We decided on desserts later. 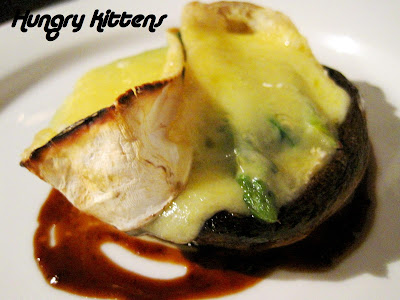 There was a bit of a wait for entrees but nothing too unreasonable. We were both REALLY hungry though so that could have tainted my tolerance. There was only one mushroom but it was huge, like a steak. It was 'meaty' - very juicy and tasty. There was A LOT of cheese. It was quite a nice entree, pleasant way to start the meal but I guess not 'oh my God that's great'. 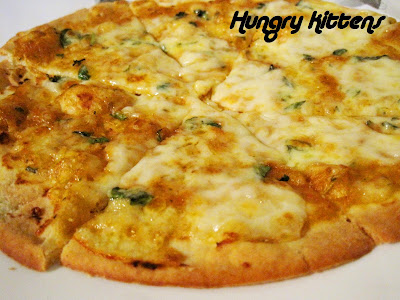 Charlie started with a complaint about the pizza bread so I expected the worst. I suppose what threw him off is the base. It looks like it'll be really crisp but it's more like a thin shortcrust. I recovered from the surprise-factor and ended up really enjoying the pizza bread. The crust wasn't a bad point for me. I love shortcrust - flaky, crumbly and buttery.

Mains can as soon as entrees were cleared. I suppose we took such a long time talking and nibbling that we finished the starters a lot later than than anticipated. 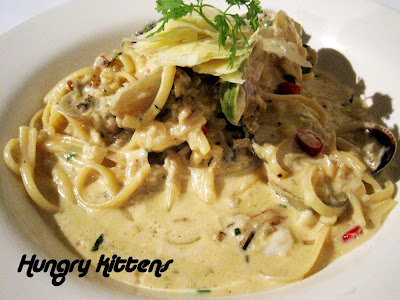 The pasta I ordered was beautiful. Fresh seafood, creamy sauce and pasta cooked to perfection. It was also very, very filling. The serving size looks 'normal' but in actual fact, you'll be hard-pressed to polish off the lot. Between the 2 of us, we managed to do just that but I was full after a few bites. 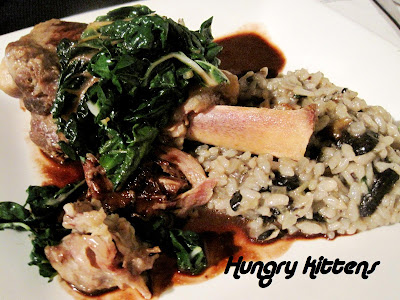 Charlie's lamb shank came with a 'special' addition... chocolate sauce. He laughed and told me what it was. I thought back to an episode of Ramsay's Kitchen that I watched. Gordon Ramsay was telling this chef off for creating something as stupid as prawn and chocolate sauce and putting it on his menu. He labeled it as gimmick food. Since that show, I considered myself to a snob towards 'gimmick food' but deep down, I was really curious to see what it would taste like.

I didn't really like it. The chocolate was smokey which was a good start but overall, the collaboration of flavors didn't work for me. When the waiter asked Charlie for his opinion, I'm not sure if he was being polite but he said he really liked it. On the plus side, the mushroom risotto it came with was amazing. It was very mushroomy, creamy but not overpoweringly so and extremely moreish. You can order the mushroom risotto by itself. 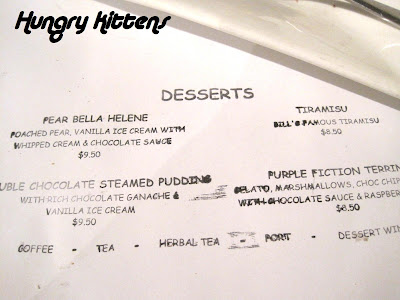 After the food, our tables were cleared and we were waiting for dessert menu. Around this time, the restaurant was pretty full. A waitress came along and pounded somthing onto our table. I was stunned for a moment and looked to see that the dessert menu was a stamp and she had stamped the selection onto the paper table covering. Also novel but very cute. 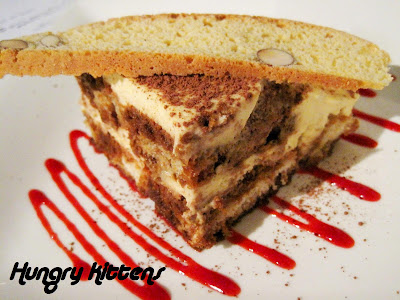 We chose the tiramisu to share. It was strongly alcoholic and strongly coffee-like. This is a ballsy tiramisu. I'm a bit of a softy and I would have liked more marscapone but I suppose that's a personal thing.

The Purple Olive left a great impression on me. The service was consistently friendly. The menu items sounded so appealing that I had difficulty choosing one. Food standard was high and I have great confidence in their pasta.
Labels: Casual Dining, CBD and Surroundings, Dining Out, Italian Restaurants