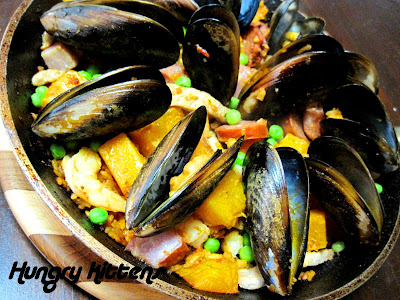 If you think this was another cooking venture driven by an episode of MasterChef Australia, YOU GUESSED IT! However, in my defense, I didn't blindly follow their recipe but overall, improvised and did my own (superior) version.

This has ended up being The Most Expensive recipe I've ever followed, largely due to the fact that I didn't have saffron at home. I went out and bought one of those tiny test-tubes with a few measly saffron threads: $14 for 10mg I think. When I came home and used them, I dropped a few threads on the counter and panicked for a few seconds before I spotted them again. Cannot believe each thread is around $3... 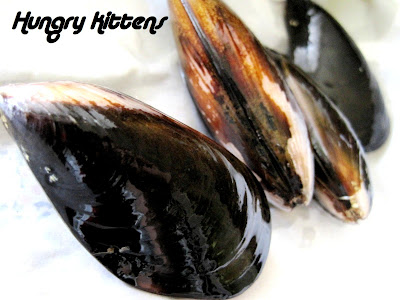 I also had to buy mussels and since I couldn't be stuffed asking around, I got a 1 kg tray of fresh mussels. This was obviously too much for the paella and I was worried about them dying so I made another mussel dish later that night.

I had a lot of different 'suitable' meat lying around at home. You can omit the pork and/or smoked ham but I think chorizo and prawns are a traditional component of paella. Pumpkin is also optional. I put a bit too much in because that's just how much I had left over in the fridge but because I ended up having too little rice, the pumpkin provided the sustainability of the dish.

A bit of a note here - the point of paella is that quantities are variable. I read the MasterChef recipe here but didn't go with their ingredients or quantities. It's the same for you when you're reading my recipe because everyone will have different preferences, different spare ingredients and so on. Take this as a guideline.

For the sofrito
For the paella
Procedure:

1. Make the sofrito first by whizzing the canned tomato, oil, garlic, shallots, vinegar, peppers, herbs and saffron together. Have a quick taste and add seasoning to your liking. Remember, the sofrito is used to flavor the rice so don't be afraid to over-season. It'll be more mild once it's absorbed. The quantities with the sofrito are only a guideline. Keep tasting and correcting till its what you like. 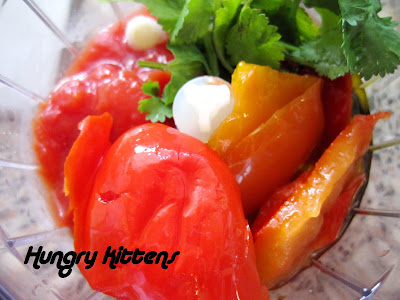 2. Prepare the pork, chorizo, ham and prawns. Cut up the pumpkin. 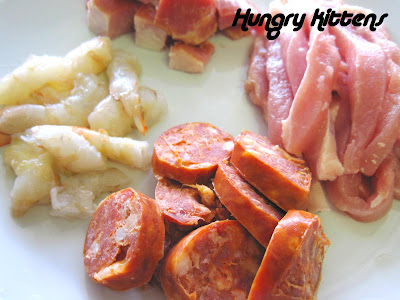 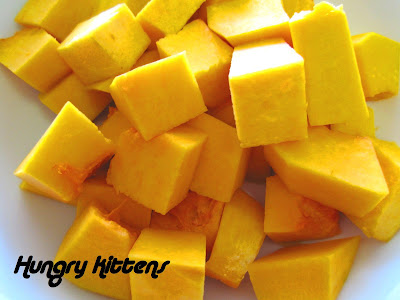 3. In a large, non-stick frying pan, quickly stirfry the pork, chorizo, ham and prawns together till the pork and prawns are cooked. Set aside.
4. In the same frying pan (don't clean it, we want the juices from the meat), heat the 3 tbsp of olive oil. When the oil is nice and hot, add the dry arborio rice and stir it around until it has sort of absorbed the oil and is browning.
5. Add on the sofrito so that it covers the rice. Stir it around until it has cooked down. Arrange the rice into a flat, even layer. 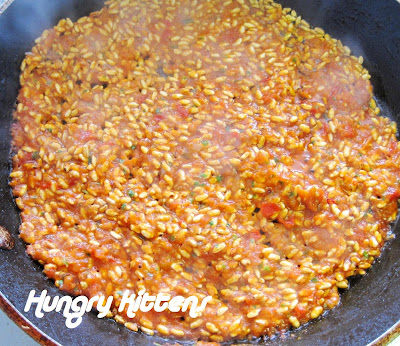 6. Pour the chicken stock over the top. You may need more or less depending on the size of your pan but you need enough to cover all the rice. Reduce the heat to medium.
7. Layer the pumpkin over the top of the rice. 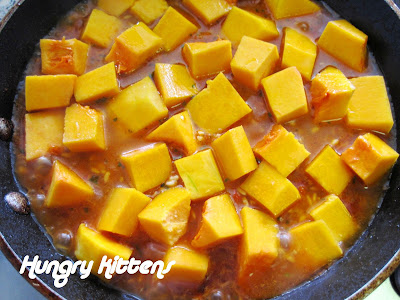 8. Place the mussels on top in an even layer. Pop on a lid and let the mussels steam in the stock. 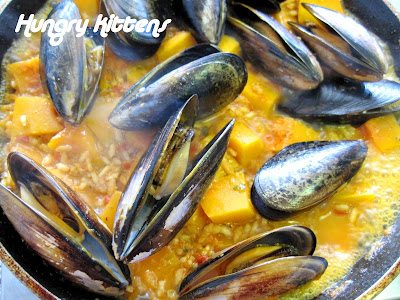 9. Check the mussels periodically and pick out any that don't open. When they're all opened, remove the lid for good and put the heat on high again. Let the stock boil down and absorb into the rice. You don't want a soupy paella mixture and you don't want raw rice. Don't stir the rice all over the place because you want a nice crust to form on the bottom of the pan (a crust of slightly burnt, caramelized rice).
10. At this stage, I removed the mussels and set them aside in a plate. I then added the pork, prawns, chorizo and ham back into the pan and stirred them around without disturbing the crust.
11. When this meat has been reheated and the rice is cooked, check how your crust is going. It might need higher heat to help it along (if you haven't switched your heat to high already). If the crust has formed, take the paella off the heat and gently stir in the peas.
12. Arrange the mussels on top. Pop on a clean tea towel and let the paella rest on the stove (with heat turned off) for about 5min before serving.
13. Serve with lemon wedges. To eat, squeeze lemon over the top and dig out generous amounts for each person. 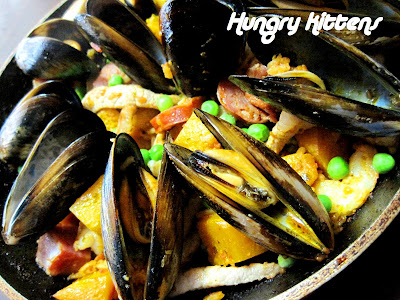 The paella turned out really well. I've had paella before at Bretts Wharf and was left underwhelmed by it. The one I made may have less seafood ingredients but the flavors sure pack a punch. I made the sofrito very spicy, very 'alive' and a bit over the top so that when it was absorbed by the rice, it became perfect. 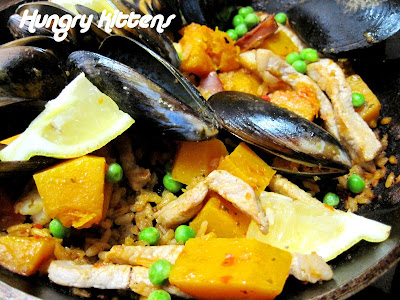 After I attacked the dish, things got messy

Next time, I will use MORE rice because my paella had a lot of 'stuff' but not much rice and the rice was (in my opinion), the most delicious part. Fans of MasterChef who saw the paella pressure test episode will want to know if I achieved a 'crust'. Well - not a whole, intact crust (like Aaron's) but there was 'crusting' and caramelisation. It was delicious. 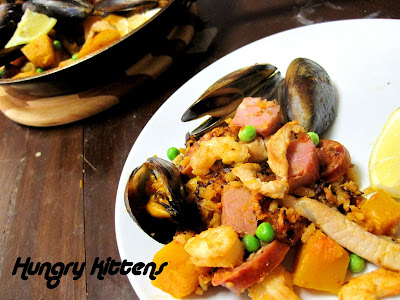 Yes the paella was expensive and time-consuming to prepare but it's so rewarding when you've finished. Not only does the dish have visual wow-factor, it's also fantastic to dig into and is a dish that's made to be shared during a big meal. I think I'll keep this recipe up my sleeve for a special occasion.