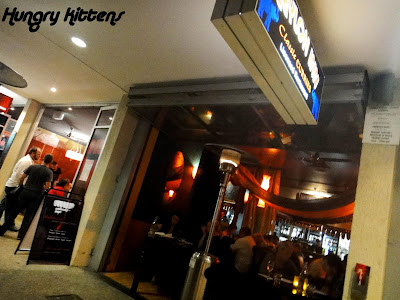 Having a meal at an Indian restaurant always feels like a treat because no matter how you order, you somehow always end up with a table full of plates, bowls and cutlery. Besides that, the food itself is warm, hearty, spicy and shared. It feels like a feast and a celebration. 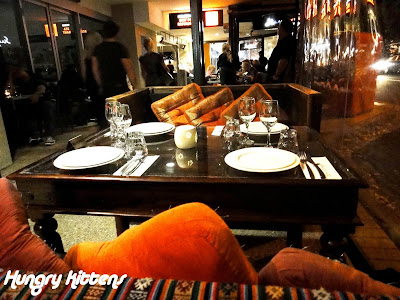 When I blogged Bombay Dhaba, an anonymous reader posted a comment saying Ceylon Inn was better than it AND Night in India. Of course, this left a huge impression on me and though I was doubtful, I knew I'd have to give Ceylonn Inn a go. 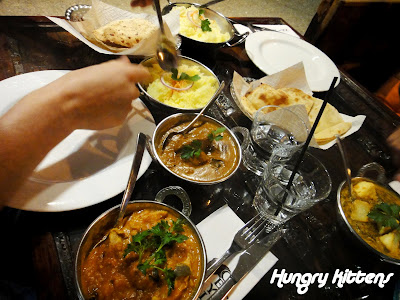 The comment was about the one in Toowong but since we were heading to Oxford Street to drop off a friend, we saw Ceylonn Inn there and decided to stop by. The reason why it was a last minute decision is that Byron has a mental block against eating Indian food out. I think the rationale is that he has Sri Lanken housemates who frequenly offer him food, as well as the fact that he often makes curry himself (as is evident by the number of curry recipes on here that were his doing). I maintain that curry is a very... 'personal' thing and you might make an excellent one yourself but it's hard to step outside your usual scope of creation. I've been to many, many Indian restaurants and well, I can make a decent curry but it just takes like 'my curry'. A good Indian restaurant will deliver something that makes you say 'wow. I wouldn't even attempt that'.

We were lured in by the nice decor. The inside has a rich, 'den' feel with lots of draping, red lighting and wood. We ended up being seated outside, which I was fine with because our table had an intricate wooden inlay and colorful cushions on the heavy benches that made me think of silk road. 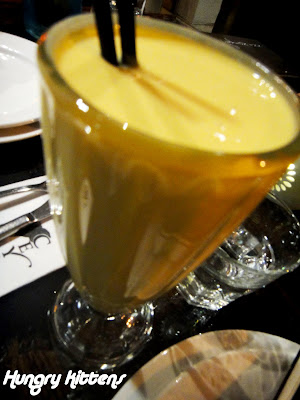 Drinks were ordered first. The only one I'll write about is my mango lassi because I see no point in commenting about a restaurant's offering of Coke or beer. The mango lassi made the beer and Coke sippers very jealous indeed. I'd best describe it as a mango smoothie that has the tartness of a yogurt. It was very thick and slightly salty too, but in a good way. Please don't let the thoroughness of my description put you off. Byron and Hien both thought it was delicious and I agree. 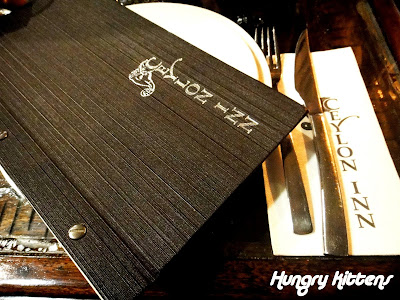 We selected 3 curries (one each, for the sake of group diplomacy), rice and a naan bread to share. Openly, we all agreed that papadums were a waste of money, since they are usually complimentary, but Hien couldn't resist and asked for a plate without permission from the rest of us. They were wholegrain papadums. They tasted like papadums, that is to say, savory (spicy lentil flavor) and crispy. 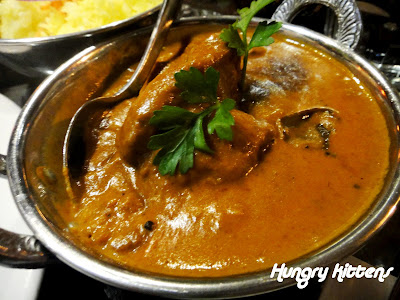 My curry of choice was the lamb korma. I am not ashamed to admit I always go for typical 'Westernized' curries like butter chicken or korma. I've done the whole 'chose the strangest-sounding item on the menu because that's probably the most authentic' thing and have often ended up thinking 'why didn't I just get butter chicken'. Being experimental is a good thing but on my first visit to any Indian restaurant, I like to test them out by ordering what I KNOW has to be good. If they can't even get that right, then bye bye to them. Luckily for Ceylonn Inn, the lamb korma was DELICIOUS. The lamb was so tender and succulent and the curry flavor was mild, aromatic, sweet and creamy - everything a korma should be. It also had a richness that you can't get from supermarket jars. The lamb korma was my favorite of the night. 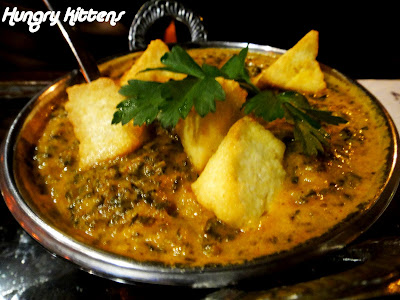 Hien picked the palak paneer. This is a spinach cheese curry and one of my favorites. I hardly ever get it because I'm too busy ordering butter chicken or korma (see above) but I have a soft spot for paneer. It's so much like haloumi! This palak paneer was good. It also had potato chunks but I personally would have preferred more chunks of paneer instead. Nice flavors and again, very mild. 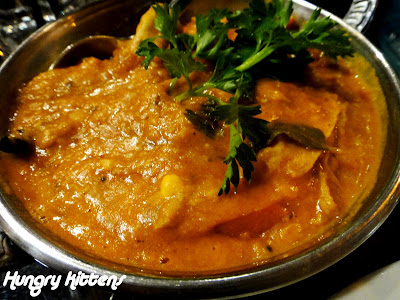 Byron's got a bit of a dahl fetish. He stews a pot of the stuff at home when he's on a budget feed. I'm not sure why this lead him to choose a dahl-oriented dish when there was a smorgasbord of other options. But hey, each to their own. I find dahl boring but luckily, this had chunks of chicken in it that injected a bit of excitement. I 'think' he liked this dish but also complained about how it would cost $1 to make at home (or something like that). I say, if you're going to think like that you might as well eliminate restaurant experiences from the rest of your life. 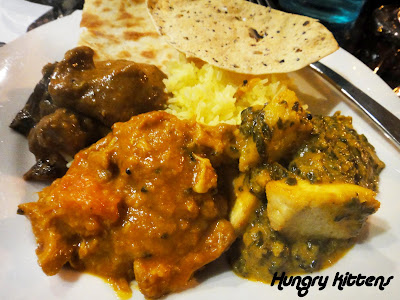 Now that the good is sorted out (and there was a lot of GOOD), let's get to the 'less good'. 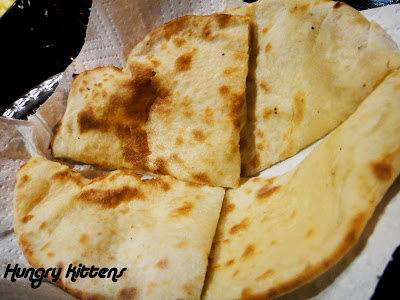 The plain naan was very plain. I didn't get to my portion until the end of the meal because I was using rice to soak up my curry so when I tried my piece of naan, it was already cold. Still, I could tell it's not one of the greatest naans out there. A good piece of Indian naan is to die for - chewy and crisp, alternatingly in the right places. This was a bit like 'supermarket naan' which is just bread pretending to be naan.

The only other thing we objected to was the serving size. By 'we', I mostly mean Byron. Sure, I thought the dishes of curry looked small too but I think that's because I was mostly worried 'oh no the boys are going to think it's not enough'. I find that curry has this illusion of not being enough whilst filling you up quickly because it's so creamy. I don't think Byron would have minded about the small serving size if he didn't like the curry as much as he did. I guess that's a compliment? But, note to Ceylon Inn: if you're going to make your curry irresistibly tasty, give us MORE MORE MORE. We're greedy kids :). 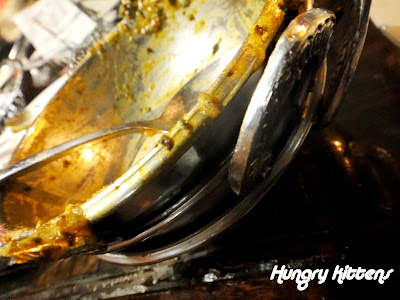 Stacked up sad and empty dishes

Ceylon Inn was a great place for delicious Indian food. The restaurant was decked out beautifully and the staff were attentive and gracious throughout. The only problem we had with the curry was that we liked it so much we felt robbed when the dishes emptied up. 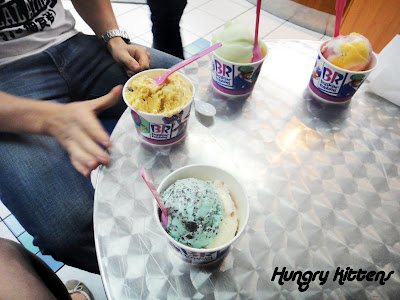 Feeling lost and craving more, we diverted to the nearby Baskin Robins where Hien ended up ordering 2 x 2 scoops of sorbet. Why? Best not to delve on the reason but suffice to say he can't stand any mention of 'sorbet' anymore :).
Labels: Casual Dining, Dining Out, Eastern Suburbs, Favorite Restaurants, Indian Restaurants