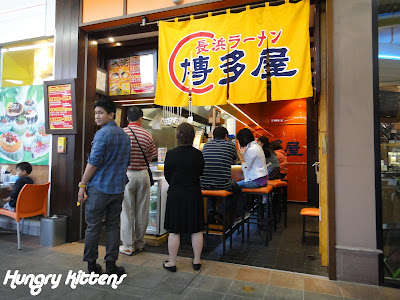 In my first placement location of this semester, I was sucking up lifts from 2 of my classmates who live at Sunnybank. They're both quite in the know about Asian food so in those days, rather than make my own decisions on what to have out for dinner, I just squeezed recommendations.

One place that was mentioned was 'the new ramen shop at Sunnybank Plaza'. A couple weeks ago, Hien and I went looking for this place. I was driving and still hadn't gotten my P's. Also, I couldn't park very well so when we couldn't locate it first attempt, I was too scared to repark at another spot, especially when I wasn't 100% sure of where we were going. The quest for ramen was abandoned that day. 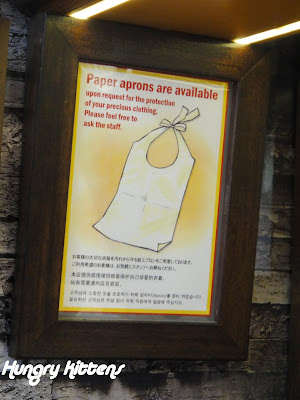 Cute? I saw people use them too :)

I forgot all about this restaurant until last week when once again, we were faced with the age old question of 'what's for eating?' The only reason we decided on trying it out is because I walked past the shop front and thought 'wow that looks cool' followed by the realization that this was the ramen store we had been looking for.

There is something in good decor/marketing because without even looking at menu or prices, I had decided we would definitely be eating there based purely on the authentic Japanese eatery appearance.

There isn't much in the way of seating, just a few outdoor tables and a long bench to sit at inside. I snatched up a couple of seats at a long table with another family and guarded anxiously while Hien stood in line to order. 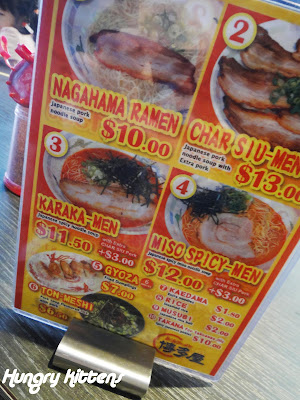 As for as ordering goes, the positive is that you don't have to think much because there are only 4 noodle options and a few snacks and sides. Of the 4 noodle options, 2 are basically the same thing but one having more pork than the other. The other 2 are spicy. While we were waiting for our order, I read the Hakataya Noodle story from a brochure. I decided that the concept is much like Ajisen, one of my favorite ramen chains in the world (I say world because Ajisen has branches in China, Singapore, Australia and of course, Japan). The deal with Hakataya is their tonkatsu soup, which means pork broth. 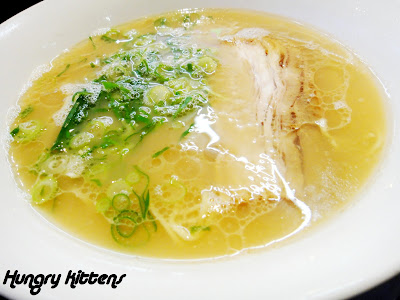 I chose their signature dish which is the nagahama ramen. It was a very simple ramen dish with the noodles in a clear broth and 2-3 slices of pork. Although visually disappointing, the flavors were great. I thought the soup was delicious and I slurped up every last drop. There wasn't a lot of pork but it was nice and tender. The noodles came with this spicy pickled vegetable thing that tasted quite average on its own but great when added to the soup. The only thing I wasn't crazy about was the ramen itself. It was a bit too much like instant noodle in texture and consistency. I do feel bad for saying that but honestly, instant noodles are yummy! I was worried about the quantity because the bowl looked smallish but this size was actually good for me. Maybe a hungry boy would want some gyoza or extra pork. 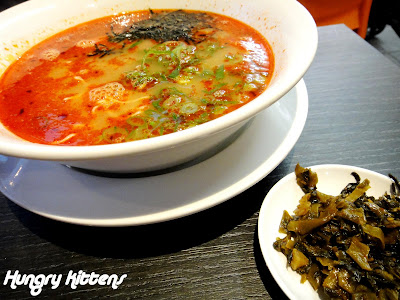 Hien ordered the karaka-men which is like mine but spicy. I had a taste of the soup and it sure was spicy. But unlike soups that are purely chili oil in flavor, this one allowed the flavor of the tonkotsu through it. The rest of the components of this dish were same as mine.

The main winner at hakataya is their famed tonkotsu. When broth is bad, it tastes like stock cubes and msg. This one was natural and simple in flavor but still had depth and complexity. I hear that tonkotsu is supposed to be highly nutritious too. 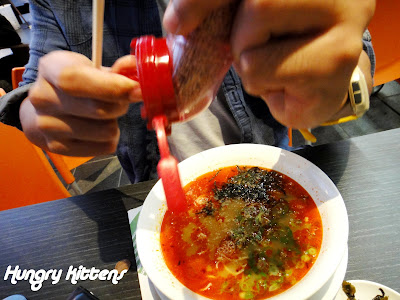 I also liked the addition of crushed sesame. This was supplied by an awesome sesame grinder with a vertical turning wheel. Pretty cool.

I'm not sure Hakataya provides a better product than Ajisen Ramen. Both have similar soup base flavors but Ajisen is more robust. I actually like how Hakataya's tonkotsu is more subtle and not as pungently garlicky. However, Ajisen has more variety, more 'stuff' with the noodles, bigger serving size, better noodle texture and is around the same price or less. All the same, I recommend giving Hakataya a go.
Labels: Asian Restaurants, Casual Dining, Dining Out, Southern Suburbs