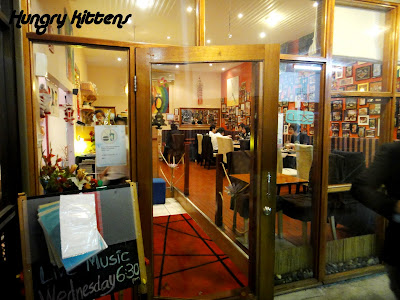 We were visiting our friend Mark in Sunnybank Hills and decided to get dinner. The original plan was to go to West End but rumbling stomachs deterred us from traveling that far. Instead, we decided on 7-8. I've blogged the place before in what seems like a decade ago (in actual fact just a few years) and loved it at the time. Since then, my opinion went down and I stopped going. This was a chance to see if my change in opinion was warranted. 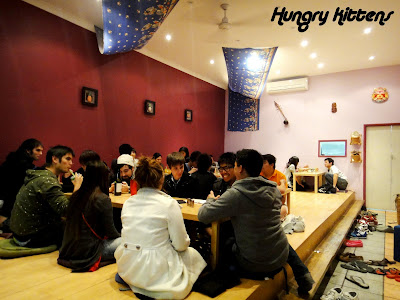 7-8 has limited seating on their regular tables and a large, side area that is for people to sit on the floor, Japan-style. I'd seen it a few times but never actually eaten on that half of the restaurant. On this day, the tables were all occupied so we were forced to the floor area. I didn't really mind because the concept appealed to me. 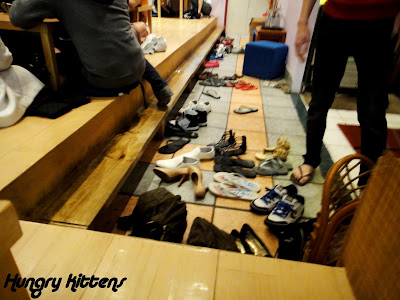 We had to take off our shoes and scramble under a table. Some restaurants that imitate Japan-style floor dining will have a little dipped down section under the tables for your feet to go. I know that's 'cheating' but for us, it would've been a Godsend. 7-8 does not allow you to cheat and for this reason, the 3 of us were sprawled in a manner of uncomfortable angles. 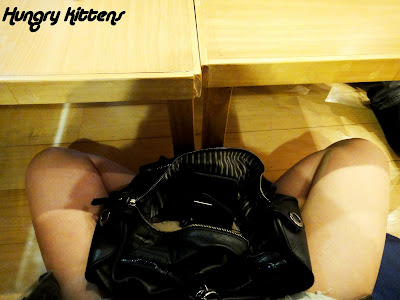 Scrunched up under the table

Mark had the worst deal because he's extremely tall and had to compromise that whilst not poking me (I was sitting opposite him) or encroaching on Hien's personal space. 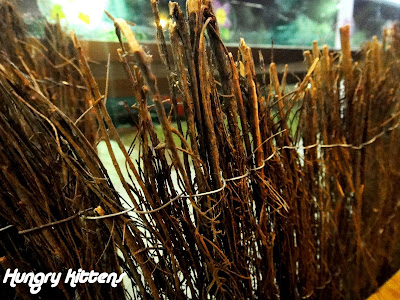 To complicate matters, 7-8 used a decorative stick border near their windows. Decorative and sharp. Both Mark and I made the mistake of venturing too close and getting stabbed. 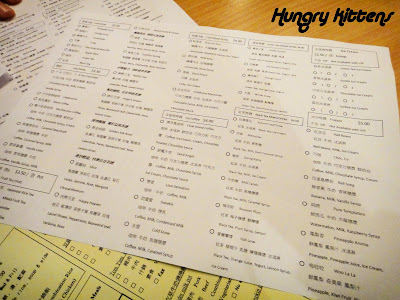 Perhaps the most appealing thing about 7-8 (unless you're keen on the whole floor thing) is the paper menu with boxes for ticking. It's all novelty, yeh? But I don't have a problem with novelty.

I originally was just going to get a drink but peer pressure lead me to tick an item from the food menu too. 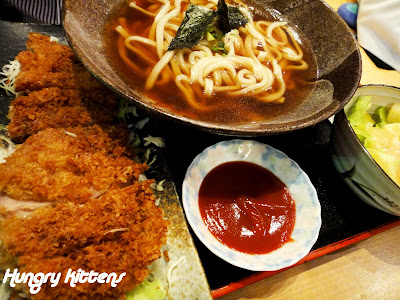 Mark and Hien basically ordered the same thing but in noodle and rice versions. It's a deep-fried, crumbed pork cutlet. Hard to go wrong. I thought it tasted fine. Hien's came out relatively quickly but Mark's required a lot of chasing. We were nearly all done when his meal was brought out. 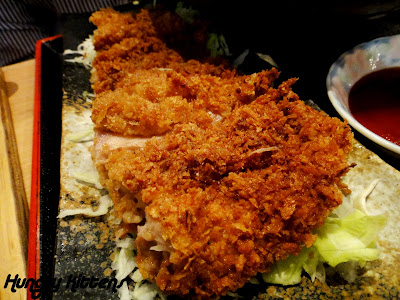 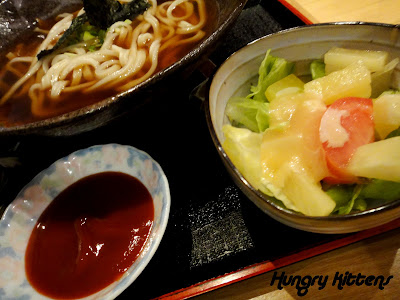 Close-up of udon noodles and sides 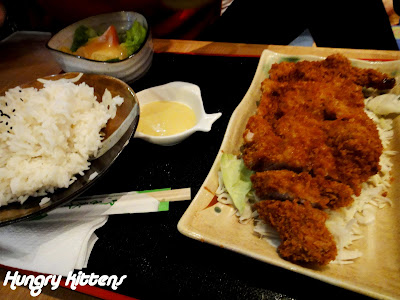 Rice version of above meal

In line with this confusion, my food (or what I thought was my food) was actually brought out first. I had ordered a pumpkin spaghetti and I didn't know what it 'should look like' (spaghetti from Asian eateries is always a mystery bag) so I just started slurping up what was placed in front of me. 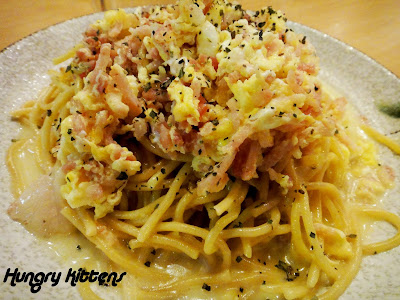 After a few bites (more than just a few), a waitress comes and tells me that it's the wrong order. That it was the bacon and egg spaghetti, not the pumpkin one. She took away my half-eaten dish and brought out another one a few minutes later. Uh... fair enough identifying the mix-up but why take back the one I already started eating? What were they planning to do with it? 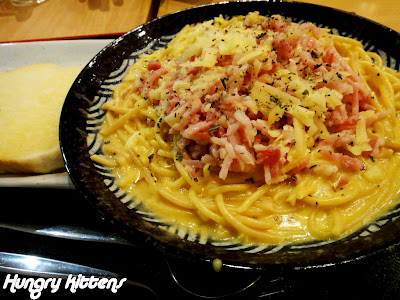 At the time, I was offended that they didn't ask if I wanted to get the 'wrong dish' takeaway but by the time I was done with my pumpkin spaghetti, I still had half of THAT left and was so sick of the creamy/cheesy consistency I didn't really feel like taking it home. The 2 pasta dishes tasted pretty similar with the pumpkin one being more saucy. This sauce had a slight pumpkin flavor but there were no pumpkin chunks. Both pasta sauces comprised mainly of cream and cheese. 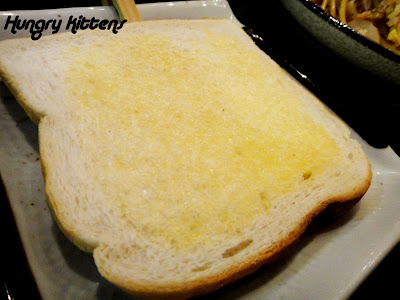 Side of... loaf bread

It was good for a few bites but your stomach starts protesting soon enough. When I microwaved the leftovers the next day, the fat separated within the sauce and it shocked me how fatty it was. Urgh. P.s. the pasta came with a slice of buttered, untoasted bread. Weird. And boring. 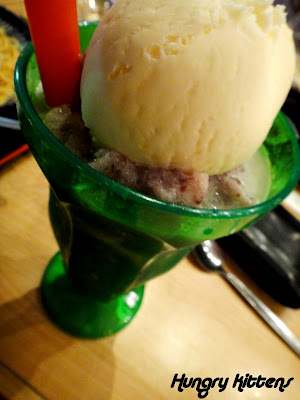 7-8 does very cute beverages with elaborate names and descriptions. I got the red bean frappe (spelt frappie on the menu). It came with a ball of ice-cream on top. No complaints. It was yum and not too sweet. 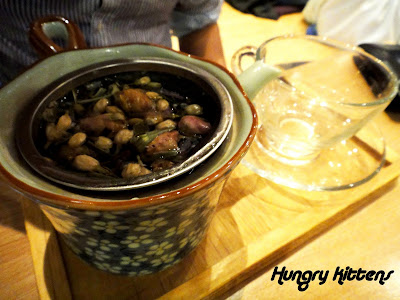 Hien (after spending ages figuring out whether the descriptions belonged to the line above or line below) chose the 'True Love' which contains a combination of jasmine, rose, lemon grass and _ (I can't read my photo of the menu but it looks like 'pansy') in a hot tea concoction. Hien commented that lemongrass was the standout flavor. 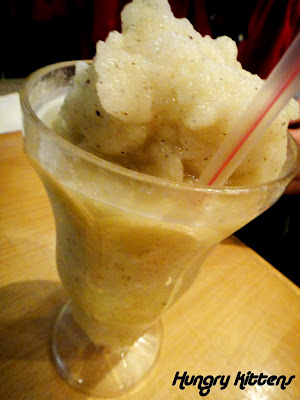 Mark's drink came after everyone else's, just like his meal. I think they had a secret vendetta against him. He ordered the 'Woo La La' which is the kiwi and pineapple frappe/frappie. I snuck a taste and was instantly jealous. Tangy and tasty.

I've reinforced my meh opinion of 7-8. It's good for drinks but the service lapses make me hesitant to go there even for that. What was really annoying was the people going around all the tables saying 'we're closing soon' when the only reason we were there for that long was to wait for our orders. It was my own stupid fault for ordering a Western dish at an Asian eatery since that is rarely a good thing... but that pasta was truly unspectacular. Add to that the uncomfortable seating and well... enough said.

Oh and I'll leave you with this, what Mark termed 'inappropriate decoration' (note: 'Happy New Year' and a poster guide of New Zealand): 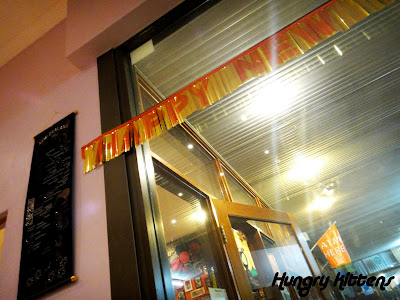