The Smoke BBQ for delicious ribs and chicken wing torture 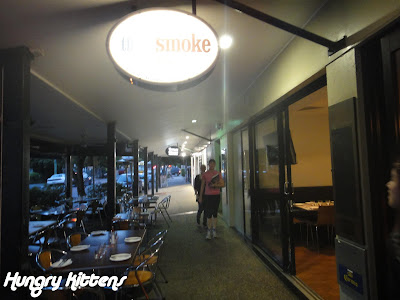 The Smoke was formerly known as Blue Smoke BBQ and under that name, established wide acclaim as Brisbane's best rib house. I did a bit of reading and found that they're the only place in Brisbane (and perhaps even all of Queensland) that smokes all their meat in house. 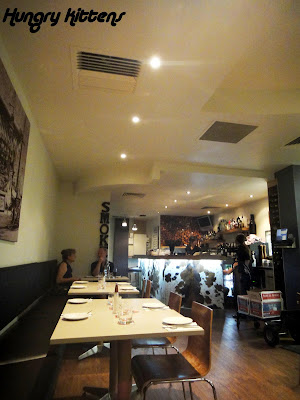 I had been to Blue Smoke once before while it was under that name and ordered ribs and taco salad. The menu hasn't changed much then but I recall that the ribs were amazing but salad was very average. I told myself that I was only going to stick to what they're famous for this time round. 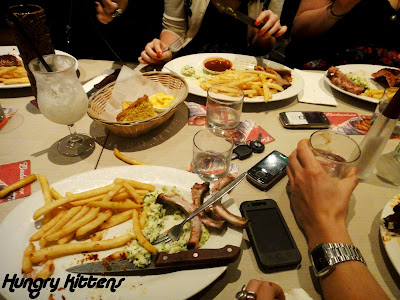 Our excuse for going is that it's Kat's birthday next week. Why celebrate now, you ask? Well I'm going overseas then for a week in China (more on that later) and I firmly told her that there was no way I was completely missing out on her birthday celebrations. Being the selfish friend that I am, I arranged a premature dinner party just so that there was something I could participate in.

The annoying thing is that Kat and I are both very busy people so it took us ages to find a night we were both free. We were discussing this last Wednesday and nearly gave up before I suggested doing it on Thursday (i.e. the next day). This gave us less than 24hrs to notify other guests. What I'd completely disregarded was the popularity of the restaurant.

I was feeling pretty good about my organization until Mark told me he once tried to book the place the night before and was told to do it a week in advance. In a fit of panic, I called The Smoke and was told they only had a table for 4 at 7:30pm (the time we wanted), or,we could get a large table for 9 at 5:30pm, provided we finished by 7:30pm. I thought 5:30pm was on the early side, especially since it was a weekday and many people have work or uni. But we really wanted ribs! By sheer luck, everyone was cool with this earlier time.

The Smoke is a small restaurant that is kind of easy to miss. I knew exactly where it was but still nearly over looked it. Hien hadn't been before and drove past/walked past twice before I finally spotted him roaming around outside and called him in.

There are a handful of tables inside and out. Considering how popular the place is, I could see how it would get booked out easily. The menu is USA rib house-inspired. There are 3 different types of ribs. They are also renowned for their buffalo wings (secret: 1/2 price wings on Wednesday...) and delicious complimentary corn bread. 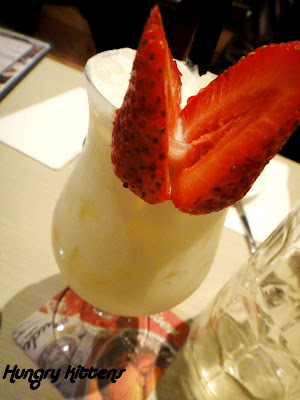 Kat got a couple of obligatory birthday cocktails. 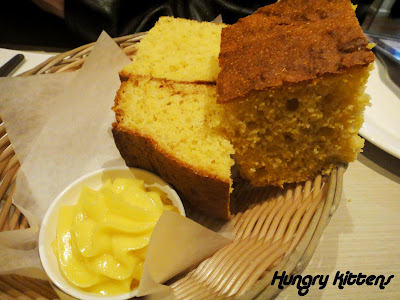 As guests were arriving, we dug into the corn bread. Everyone was raving about how nice it was. The corn bread is warm, soft and sweet with a subtle corn flavor. Great with the soft butter.

The ribs come in a 1/2 or full rack. Most of us chose a 1/2 rack of the Kansas City baby back pork ribs. One of the guests got a beef brisket. Hien decided to be original and got the Texas beef short ribs. Kat also got some onion rings. Byron wanted to go halves on a full rack of pork ribs with me but in the last moment decided on the buffalo wings. He was attracted by the warning of '3rd degree burn' which is the spiciest you can get. When he ordered them, the waiter said 'they're very hot... are you sure?' He said that it was. Little did he know what was to come... 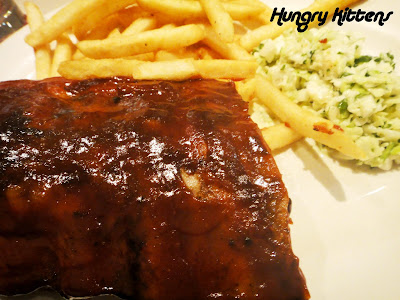 Kansas City baby back pork ribs - rubbed with special seasoning, hickory smoked and finished on the char-grill where they are mopped with The Smoke's Kansas City style BBQ sauce

My rack of baby back ribs were DELICIOUS. The flavors are a perfect balance of sweet and smoked. Byron tried a bit and said it was like Christmas ham (the good stuff) but sticky and charred at the same time. There is quite a bit of meat too and the meat just fell away from the bone. Cooked perfectly. 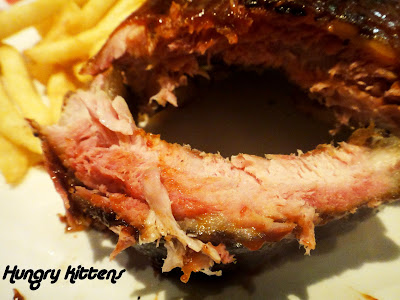 The ribs also came with chips. If at all possible, the chips might have left an even greater impression on me than the ribs. Maybe not. But maybe yes! The chips had a depth of flavor that I've never tasted in chips. I mean, who even uses 'depth of flavor' in describing hot potato chips? The best way I can explain it without sounding even more Matt Preston wannabe is that they tasted like a burger... but in a chip form. Not just any chip either. They were battered and crisped wonderfully.

There was also coleslaw on my plate which was a nice compliment to the rest of the food. It was cool, tangy and fresh and was a great palate-saver when I needed some (you'll know what I mean later).

I didn't go around tasting everyone else's food (being a food blogger doesn't come with as many perks as you'd hope for) so I can't comment on the following: 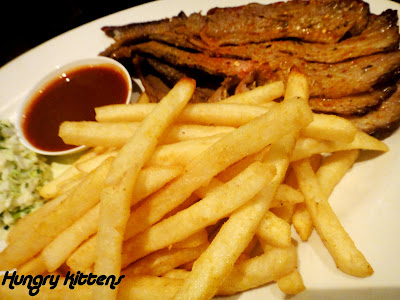 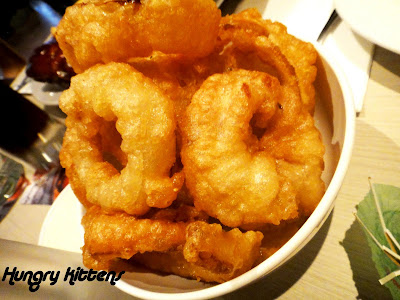 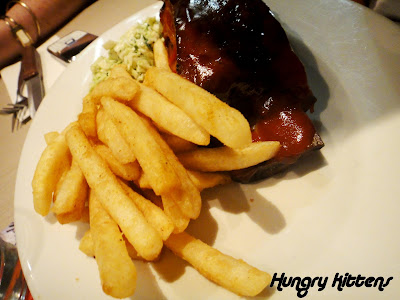 The other thing I DID try was one of Byron's wings. I wasn't planning to, even after he insisted a few times. What made me do it is that we had joked around in the past about doing a 'spice off' against each other. Both of us think we can handle hot food well. When he said 'you should try this for the spice off', I mentally rolled up my sleeves and thought 'here we go. No worries'. 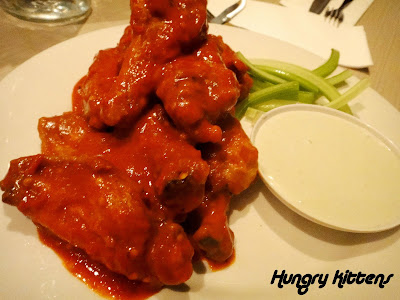 I picked up a single tiny wing and bit in. Hmm... very hot. By the time I was half-way finished this wing (which was maybe 20 seconds later), my mouth was stinging and my eyes were watering up. No, that's an understatement. I wasn't just tearing up a little bit. Tears were running down my face. Even the fingers that were holding the wing were hurting. I should've stopped there but stubbornness forced me to finish the wing. I reached for some water, gulped it down and was horrified to discover the water did NOTHING to reduce the pain. It was beyond the scope of being able to be relieved by water. At this point, I tried my coleslaw and PHEW, the tangy coolness of the coleslaw proved to be a savior.

Well that was me, a self-proclaimed chili expert being brought to tears. What about the fact that Hien, of Vietnamese heritage (whose father chews on raw birds eye chilies) dipped his chip in the spicy chicken sauce and said 'WOAH THAT'S HOT'.

Now, let's come to the fact that Byron finished a whole plate of this stuff. Respect. I'm definitely not going up against him in any spice off in this lifetime. He kept his discomfort to himself for the most part but described the experience as 'torture' and the ultimate test of endurance. The waiter came by to check up on us and declared that 'he looks alright. You don't look too good' about me. He took pity on Byron and brought him a glass of cold milk. 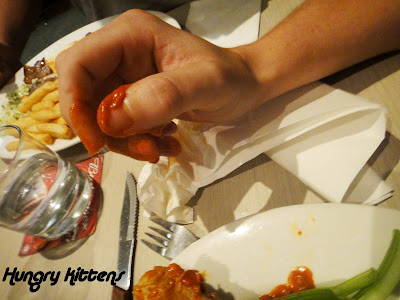 We're saving the knowledge of this spicy chicken to use against someone who thinks they are keen on spice.

All up, everyone had a great time at The Smoke. Service was fast and the ribs are great. Not only that, I came out with a memorable experience and life lesson learnt (Cora cannot handle very spicy food). Having said that, I'd definitely go back for 1/2 price non-spicy wings.
Labels: CBD and Surroundings, Dining Out, Favorite Restaurants, Informal Dining