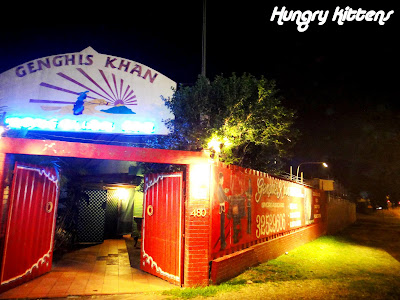 Last Friday was a big day for me. It was my second attempt at the practical driving test. The pressure was on because I really NEEDED to get my license. I'm on placement about 40min from home, outbound, and it was a real task for me to get lifts from mum (she works in the city). I failed my first go because of real unlucky circumstances and I passed this time round because I was super lucky enough to have a nice examiner.

It's been the biggest burden off my shoulders.

To celebrate, we all went out for dinner Friday night, with the intention of heading out to a birthday party afterwards.

When we were deciding where to go, Byron found Genghis Khan on Google. He was in a particularly starved mood and everything he suggested was all-you-can-eat. Genghis Khan boasts of buffet-style Mongolian barbecue meat. It sounded like it was in the same vein as Sizzling Mongolian BBQ House, which I've visited and reviewed. I didn't like that experience at all (you can read that post for details) and insisted we go some place else.

I itemized a list of reasons why anywhere else was better. Byron pretended to listen but by the time we were ready to head off, he had decided my arguments didn't make sense and that in his eyes, unlimited BBQ meat could do no wrong. It was me vs 3 guys, all with that same frame of mind so I gave up.

The moment we stepped inside Genghis Khan, I nearly burst out laughing. The restaurant is huge and there was no one inside. Not one customer. The waitress looked up at us in shock and even after we said '4 people', she still didn't seem to know what to do with us. She asked 'are you here for all-you-can-eat barbecue?'

I didn't know they had anything else? 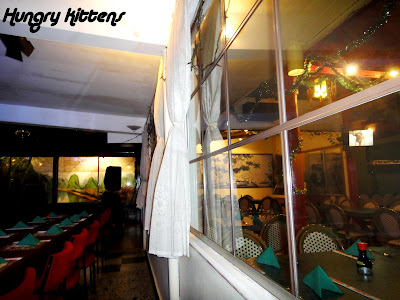 In any case, we were seated. The restaurant is petitioned off into 2 sections. There's an 'outdoor' area which isn't really outdoors but has a retractable roof. We were in the 'indoor' area, chosen because it is closer to the hot plate. 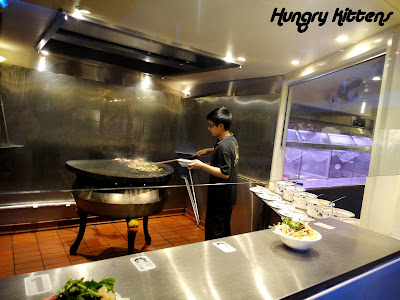 Like I had imagined, it's the exact same concept as Sizzling Mongolian in St Lucia. The idea is, you grab a bowl, fill it with an assortment of meats, vegetables and cooking sauces and then present it to the guy next to a giant hot plate. He then stir-fries your meal with a pair of giant chopsticks before handing the finished product back to you. 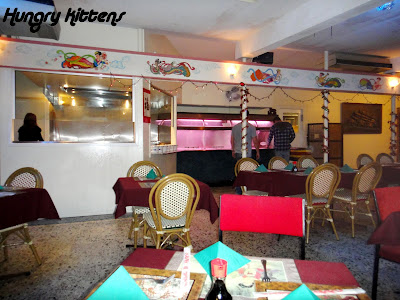 Out of the meat trays, there was a selection of sliced chicken, pork, lamb and beef. We tried a bit of everything. I liked the chicken best because it was most tender. The beef was quite tough. The guys liked the flavor of lamb because it was very strong (i.e. not for anyone who hates lamb). 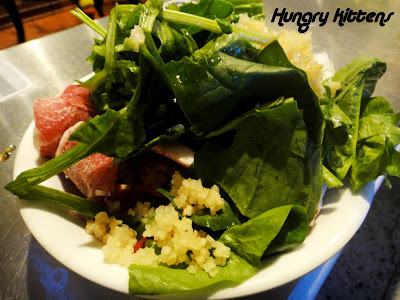 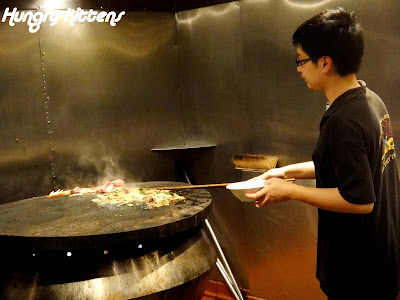 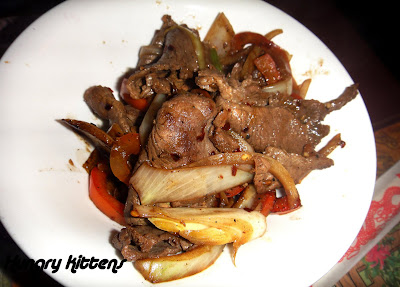 The problem with this, as we later identified was that because these were basic ingredients required in almost all stir-fries, the only variation you could get was from proportions and a limited supply of 'finishing sauces' (including sweet and sour, and chili). The result was that many of the stir-fries tasted quite similar.

We found that the trick was to use lots of flavor. Because the meal is cooked on a cone-like hotplate, there isn't a lot of sauce like in a stir-fry you make at home. If you load up your bowl with sauces, there tends to be a bit of residual sauce in the finished product which makes it go well with rice, rather than be dry and bland. Also, veggies shrink heaps so if you want a noticeable portion in your stir-fry, really pile up the greens. 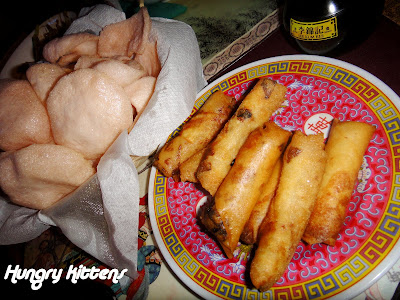 While we were lining up for our first round of creations, we were brought out a tub of steamed rice (slightly overcooked), some spring rolls (in my opinion, these were incredibly bland) and prawn crackers (can't go wrong there). 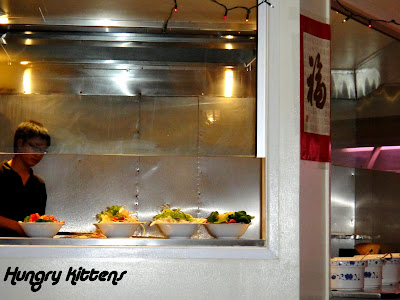 Aside from us, there was one other table of customers that came later on. It was a pretty big group and when they started lining up for the hot plate, the queue became long. This was a flaw I identified at Sizzling Mongolian because no one likes waiting for their food to be cooked, especially when there's no ready-to-eat salad bar.

We tried to time our cooking by having at least one member of the group line up at a time so that there was always a dish ready. This got foiled when that other group of diners stuffed up the system by repeatedly putting their plates down in front of ours so that theirs got cooked first. It was very frustrating because we thought the hot plate chef would recognize who's was their first and we didn't want to cause a scene. He didn't know so we had to pointedly move our dishes forward after already missing out a few turns. 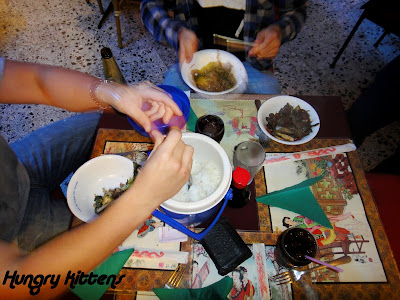 I got fed up with this style of eating fairly early on. The guys kept going though. I haven't changed my opinion much about all-you-can-eat Mongolian BBQ in this style. In my mind, I prefer to cook it myself on an individual BBQ hotplate (like Korean BBQ) rather than wait for someone to do it. I also need fresh greens, fruit, something sweet to cut the meat. By that I mean a salad bar of other types of food.

Byron was in agreement with me that there wasn't a sufficient variety of sauces. And of course we were all annoyed about being cut in line. I'd say this is a meat-lover only kind of experience.
Labels: Buffet, Casual Dining, CBD and Surroundings, Dining Out