Oli for Lunch and Cake 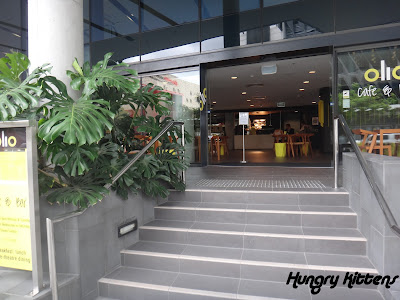 I had just finished my impromptu lunch of banh mi from Kim Than and the city was still in lockdown. My car radio was reporting the news play by play and suddenly it was announced that the gunman had been shot. My original plan for the day pre-incident was to meet Marc in the city but with all this going on, I wasn't sure whether to wait around or to bugger off. Marc suggested that they were evacuating the city but he didn't know how long that would take. 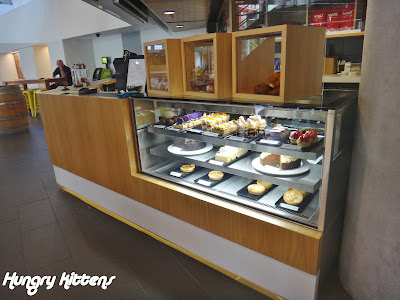 I decided to set up camp at South Bank Parklands, grab a drink and enjoy myself. My reasoning was that worst comes to worst, if the city folk were not released any time soon, at least I would have still had a drink. 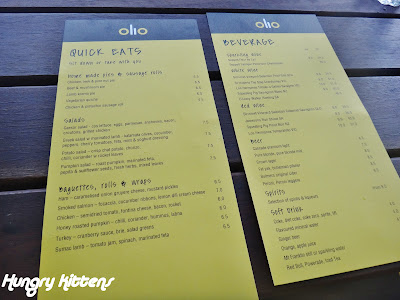 Olio is a cafe that I've walked past COUNTLESS times on my way to the deeper part of South Bank from South Brisbane. It always appeared closed but I don't know if that's because it was actually closed or if it's just because it's tucked away and sort of 'dark' looking when peering in from the outside. 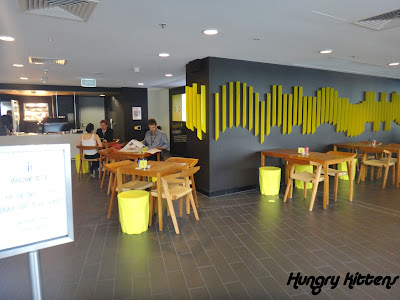 There was ample inside seating but I liked the look of the tall bench outside, probably because the weather was decent for the first time in many weeks and I just wanted to soak it up. 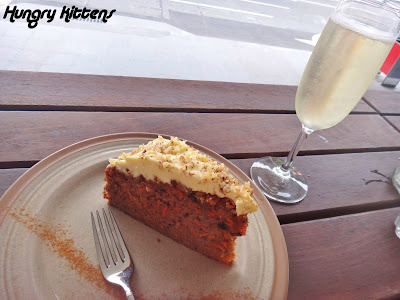 For myself, I ordered a glass of sparkling wine and a slice of carrot cake. I lost myself for a few moments gazing out onto the street and fantasizing about quitting work and becoming a permanent lady of leisure. Bubblies and cake is something I can easily get used to. 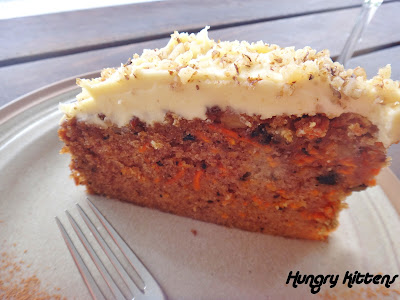 Marc once asked me if carrot cake had real carrot in it. I glared at him so hard I'm surprised he didn't feel the daggers. He cites carrot cake as one of his favorite cakes. I couldn't believe someone who was meant to appreciate this delicious baked product would potentially be eating that fake, packet variety that has no ressemblance to the real deal but for artificial flavoring and orange dye. 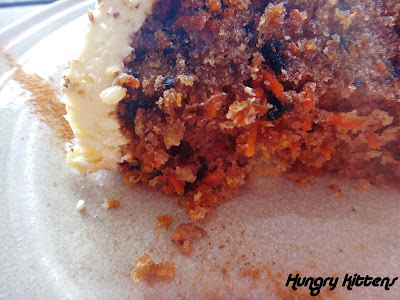 The carrot cake at Olio definitely contains real carrot. It's got a nice, dense texture and is lightly spiced and not too sweet. The cream cheese topping is creamy and thick.

Finally, once Marc was allowed to leave Queen Street, he headed right on over, probably expecting me to be blowing my seams with impatience. He doesn't realize just how subduing a glass of wine can be! 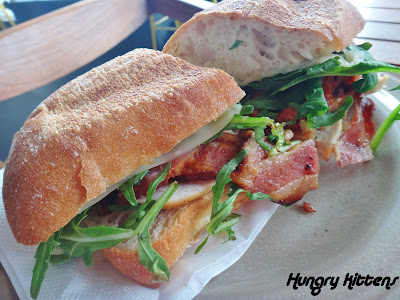 He ordered from the light lunch menu: a chicken baguette with rocket and bacon. It had the option of being toasted or fresh but we went for untoasted. The baguette was of decent serving size with lashings of bacon that peaked out from between the layers of bread.

I thought Olio had a really good selection of lunch-time food options. I would have liked to try one of their salads because I've heard a mention on Twitter that they're supposed to be really good.