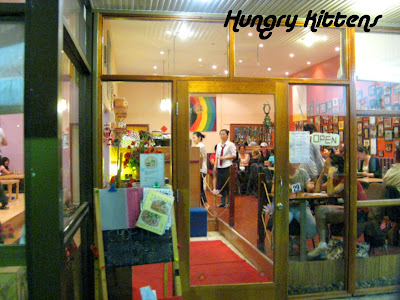 Tucked away in a not-so-obvious location, I would call 7-8 a 'hidden gem' if it wasn't so popular. In fact, the restaurant has become a regular student hangout and is there is often a queue to get in.

Since I first went to 7-8 a year or so back, it has expanded. There is now an area with normal table/chair seating and a side area. The side area is more expansive but there is a 'shoes off, sit on the floor' policy. If you're interested in having a function at 7-8, be aware that your guests will be sitting in that area, on the floor. 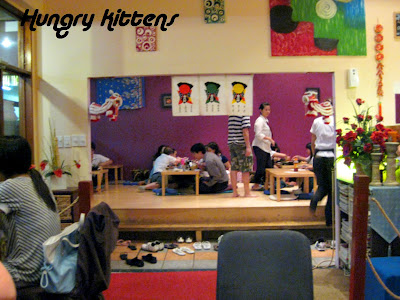 See through the doorway to the floor-seating

In my opinion, the restaurant succeeds in innovation. It is furnished in a cute, cluttered manner that gives it a slightly boutique feel. The menus are on printed paper and each option has a little square. You tick an item if you'd like to order it - it's not rocket science. I say 'menus' because you get their food menu and their drinks menu. 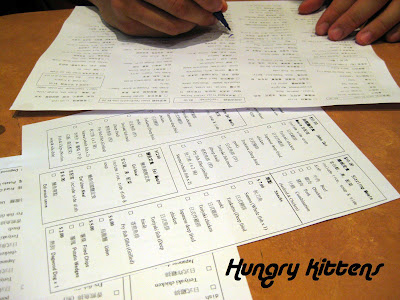 Food options are mostly set-meals. As an overview, you decide if you'd like rice, noodles or claypot. Within each of those categories, you can chose between regular Japanese offerings like teriyaki chicken and fried pork or fish.

The drinks menu is what sets 7-8 apart. Spread across an A4 page is an impressive multitude of imaginative drink combinations. I'm talking non-alcoholic here. There are many herbal and floral teas, ice-cream and juice/soda/coffee combinations, shaved ice and other dessert-like 'drinks'. I read one that contained green tea, yogurt and jelly. Sounded interesting but I chose something safer to begin with!

From what I remember, 7-8 has a minimum spend, per person. This sounds a bit pretentious but it makes sense when the seats are so in demand at peak times. The minimum spend was something like $3.50 per person anyway, which is easy enough to meet. Drinks are priced at around $4 each and cakes are a ridiculously cheap $3.50 per slice. 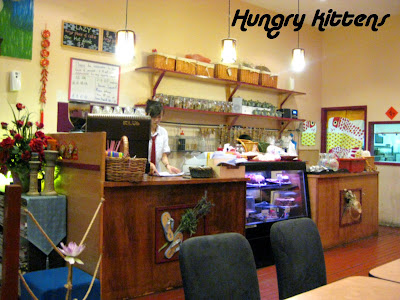 There was a bit of a wait on the food and we got slightly frustrated at watching everyone else get their meals before us. It would have been better if we got our drinks first so we'd have something to do while we waited. 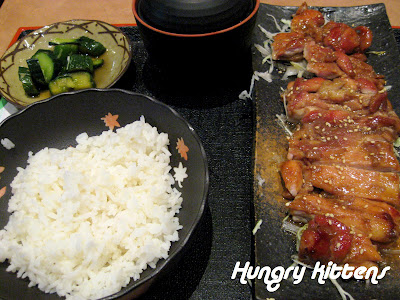 Charlie got his meal before mine. Quite substantially before mine, to the point where I was worried he'd be done before I even started. I couldn't even pick away at his food to keep myself occupied because the chopsticks come with the meal. 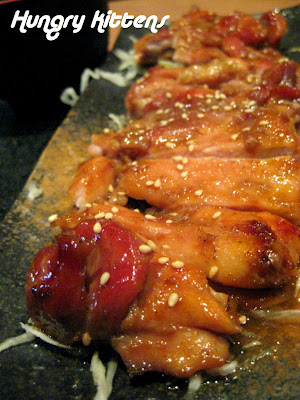 I'm not usually a fan of teriyaki because I just think it's rather boring. This teriyaki chicken was quite nice. It was very tender and just the right amount of sweetness. Charlie commented that it was 'peppery' and I noticed it too. However, this was something he liked but I DIDN'T like. 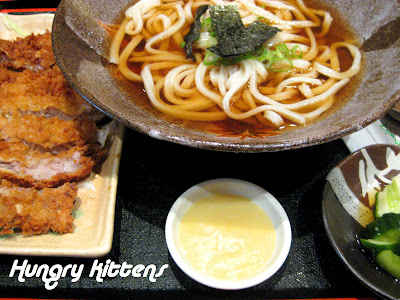 When my tonkatsu (Japanese deep fried pork) udon arrived, I dug straight into it. The udon noodle itself was run-off-the-mill and had a very machine-made quality to it. Not bad but not 'wow'. It was served in a miso soup base. 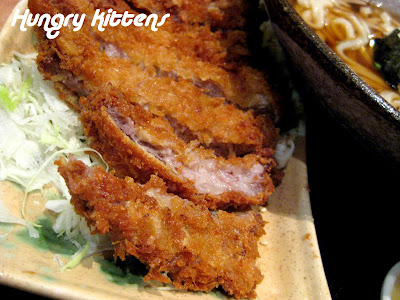 The pork chop was large and each piece was very crispy. I thought it was a bit chewy on the inside though and under-flavored. Even the lemon mayonnaise didn't save it because that was also a bit bland. Having said that, deep fried pork is never going to taste 'bad' as per se so I finished most of it.

The other side was a spicy cucumber dish that I didn't really like. Charlie also got a miso soup.

After we finished our meals, we were told we had to wait ANOTHER 10min for drinks. That was a bit annoying considering how long we'd waited for the food already. However, the waitress explained that they only had one person making the drinks that night. It's nice when the staff bother explaining lapses in service rather than just dashing off with a mumbled apology. We were in no rush any case so we waited a bit longer. 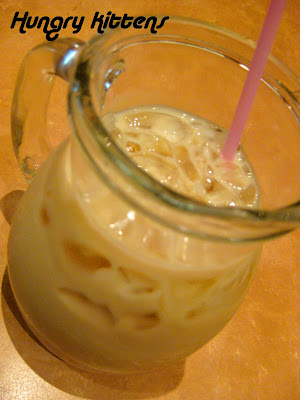 My drink was called 'Memories' and the description was black tea, dark caramel and milk. It tasted like a strong, more complex milk tea. I quite liked it - very sweet but somehow refreshing at the same time. 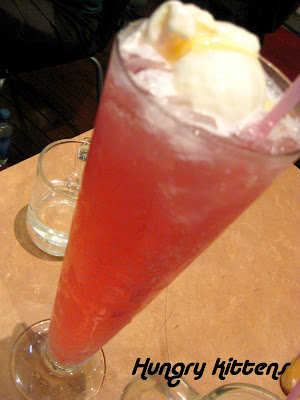 Charlie ordered the 'Pin Yong' or something (can't remember exactly). This is basically a pink lemonade spider in a long glass.

I was absolutely dying to try a slice of profiterole torte - simply out of curiosity. Unfortunately we ran out of cash (about 30c short). Be warned: this is a cash-only joint!

Despite the unexceptional standard of food or occasional service flaws, I still quite like 7-8. I believe there is more reliable Japanese food elsewhere if you're after good taste. However, the place has established a unique feel. It's somewhere you'd like to hang out with friends and maybe have a drink or cake. After all, with the drinks menu, 7-8 really comes in to its own territory.
Labels: Asian Restaurants, Casual Dining, Dining Out, Southern Suburbs