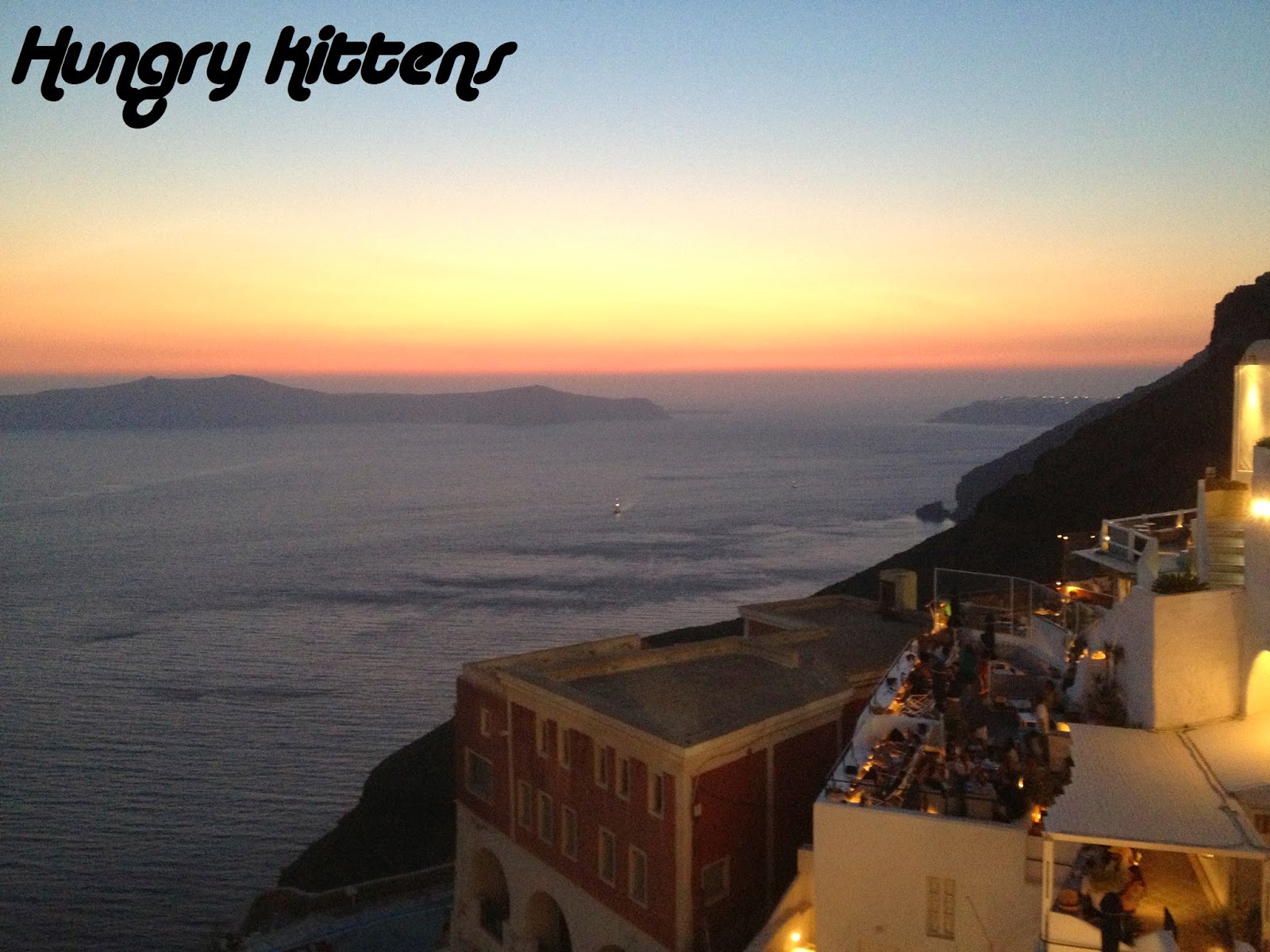 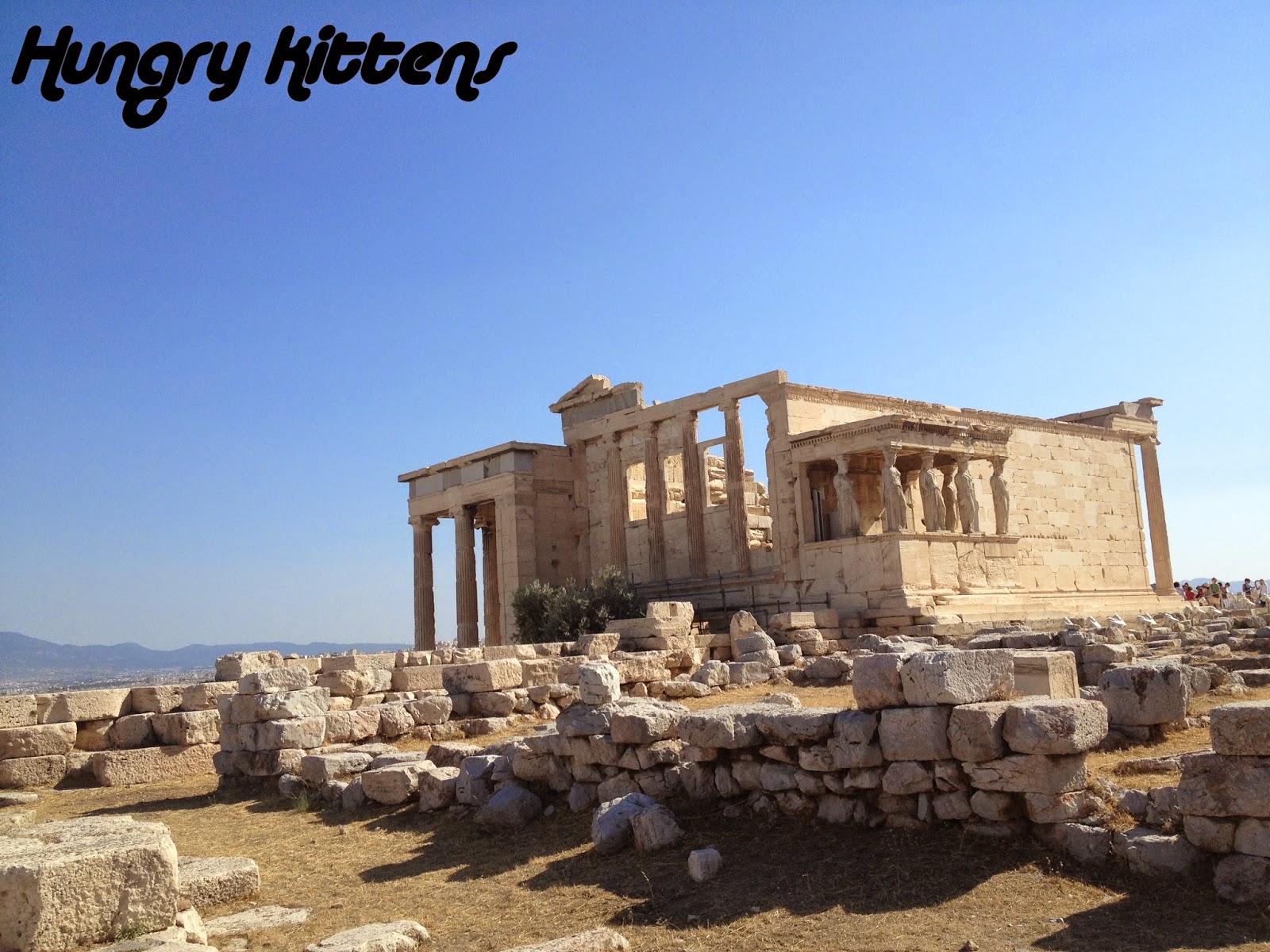 Marc and I flew from Rome to Athens and spent a couple of nights there before moving along. Athens was much like what I expected. It's a sprawl of old and new with scatterings of ancient ruins throughout. There's definitely an element of messiness but I found it endearing rather than threatening like the dark side of Paris or Naples. 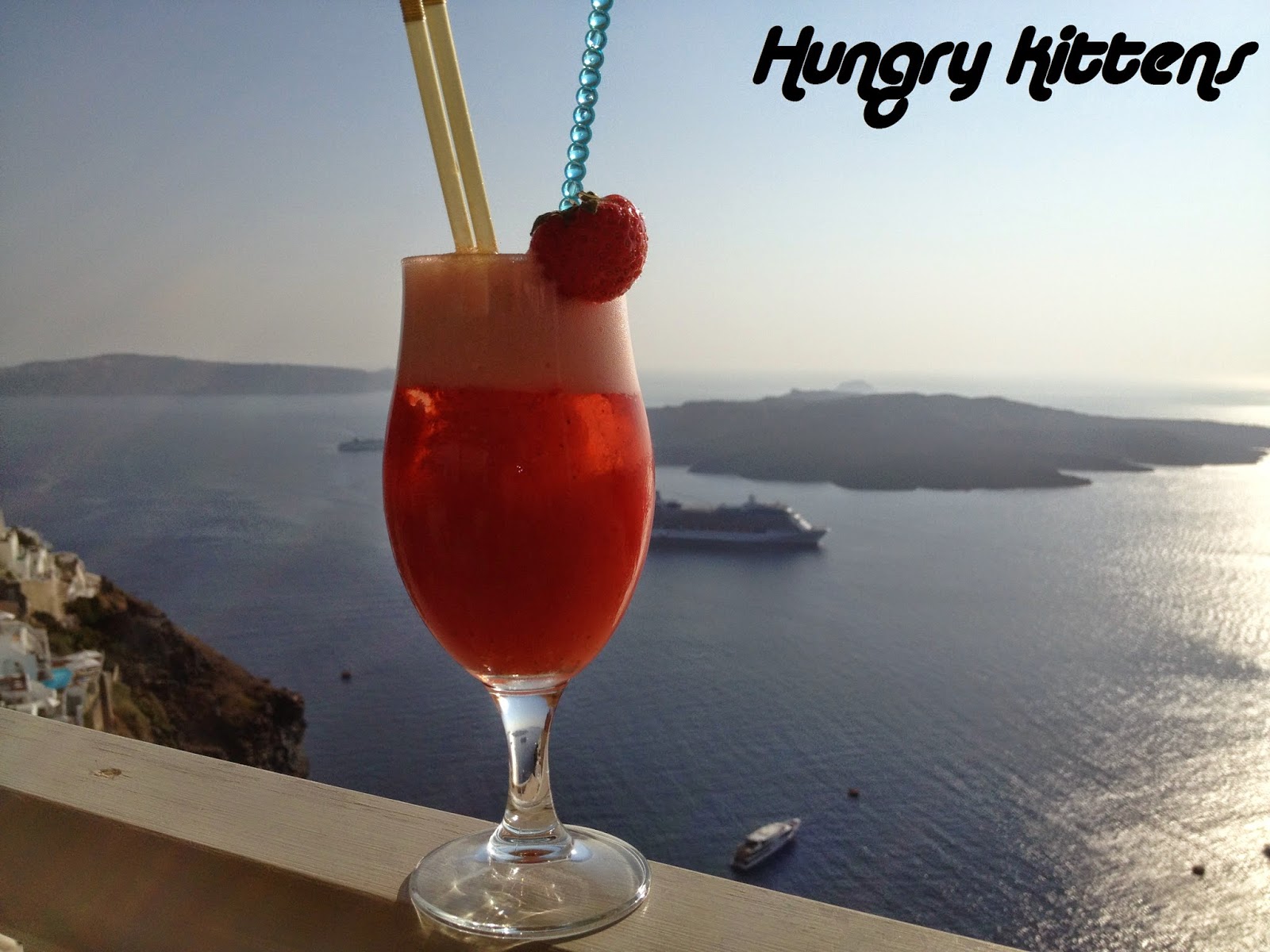 We partook in a half day tour to check out all the necessary sites (Acropolis and whatnot). Another half day was spent on a walking tour to explore the culinary aspect of the city. This was much more to my liking and is blogged about here. 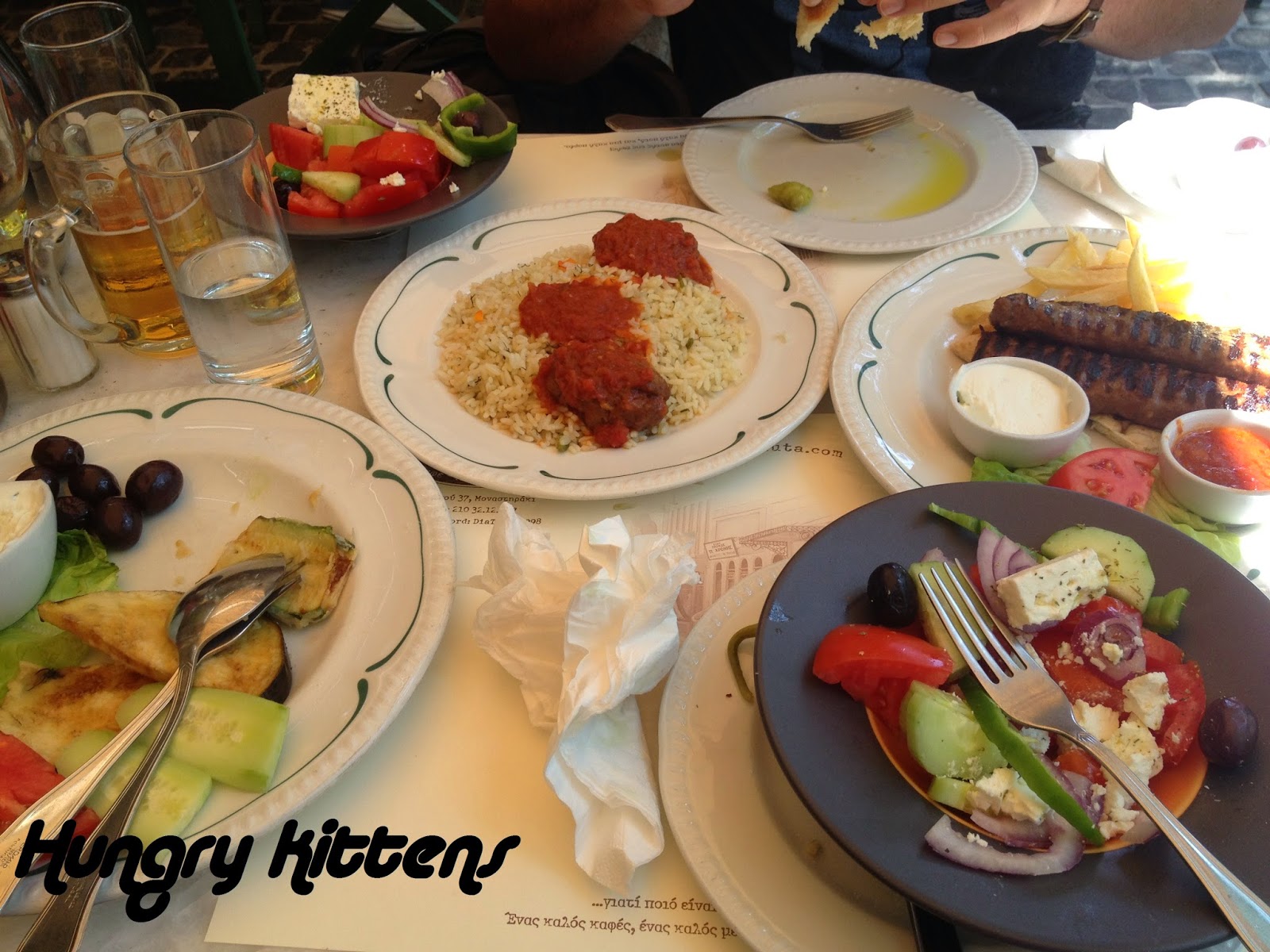 My impression of food throughout Greece is that it's very fresh. It was all a welcome change after Italy where we carb-loaded at every meal. Greek food comprised mostly of grilled meat (protein) and salad (veggies). It was about time we had some greens in our diet!

I developed a love for taramasalata, which is a codfish roe dip. It's so savoury and delicious and has a slight ponginess perfectly offset with lemon. Taramasalata plus warm flatbread is perfection. I tried to find a photo of it but couldn't... which suggests that all the times we ordered it, I dug in too quickly to get a shot. If that doesn't prove how delicious something is, I don't know what does. 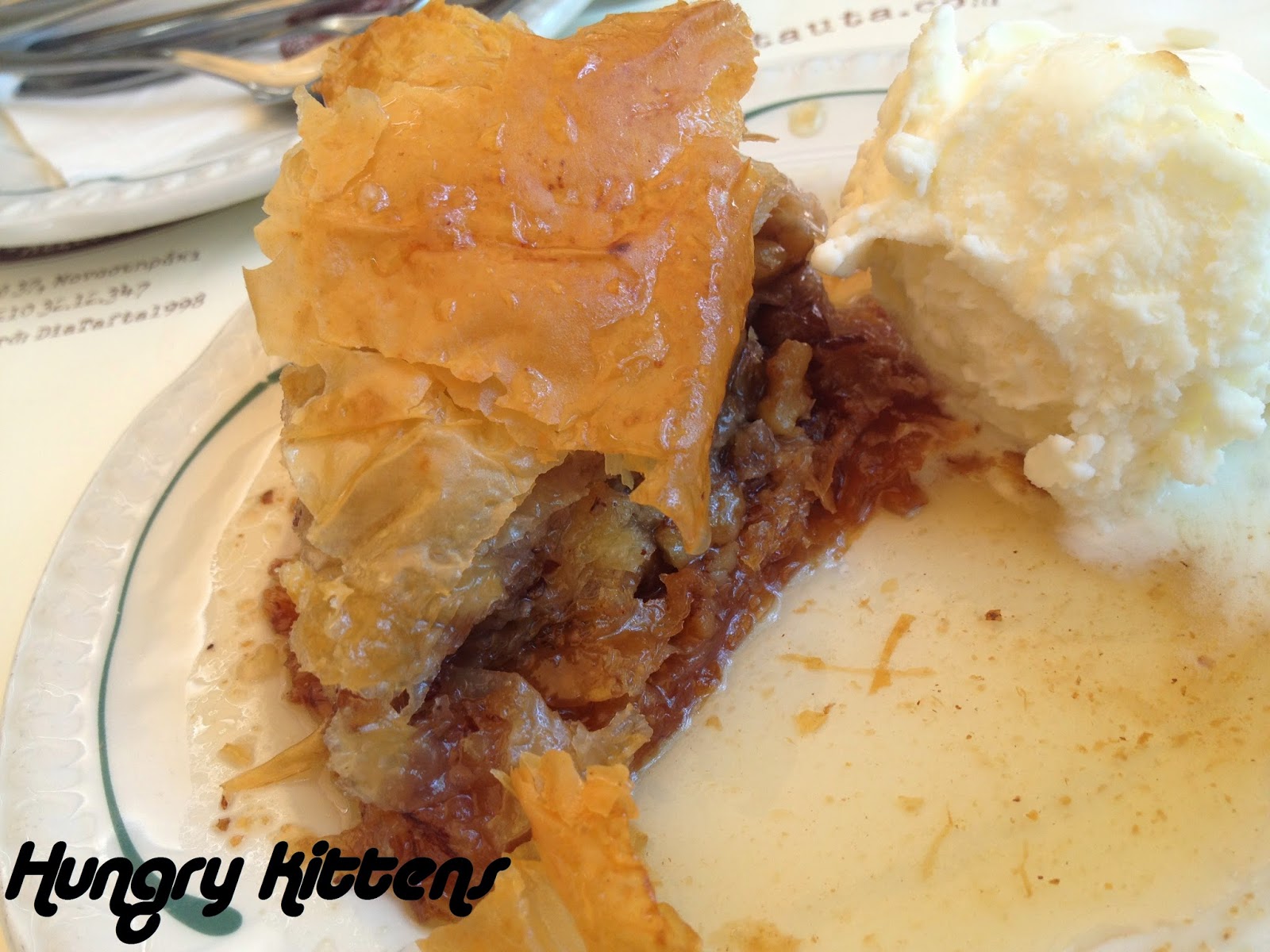 Greece is also home of baklava, one of my favourite desserts of all time. I definitely ate my fair share. The best we had was from Oia in Santorini. It was from a bakery and Marc and I ate it at the side of the street on a bench. We got syrup all over our fingers and it was so uncomfortable but so worth it.

One 'issue' we had was that most restaurants gave us (often complimentary) shots of Ouzo or its cousin Raki. YUCK! I hated it. Marc hated it. But being the alcoholic Aussies that we are, whenever a friendly Greek waved it in our face, we bravely shot it down. I'm just glad my face didn't freeze with the expression I had after every taste. And from what I hear, the locals sip the stuff! Sip! Tasting every drop! Bravo, bravo. Respect to you, Greek guys. 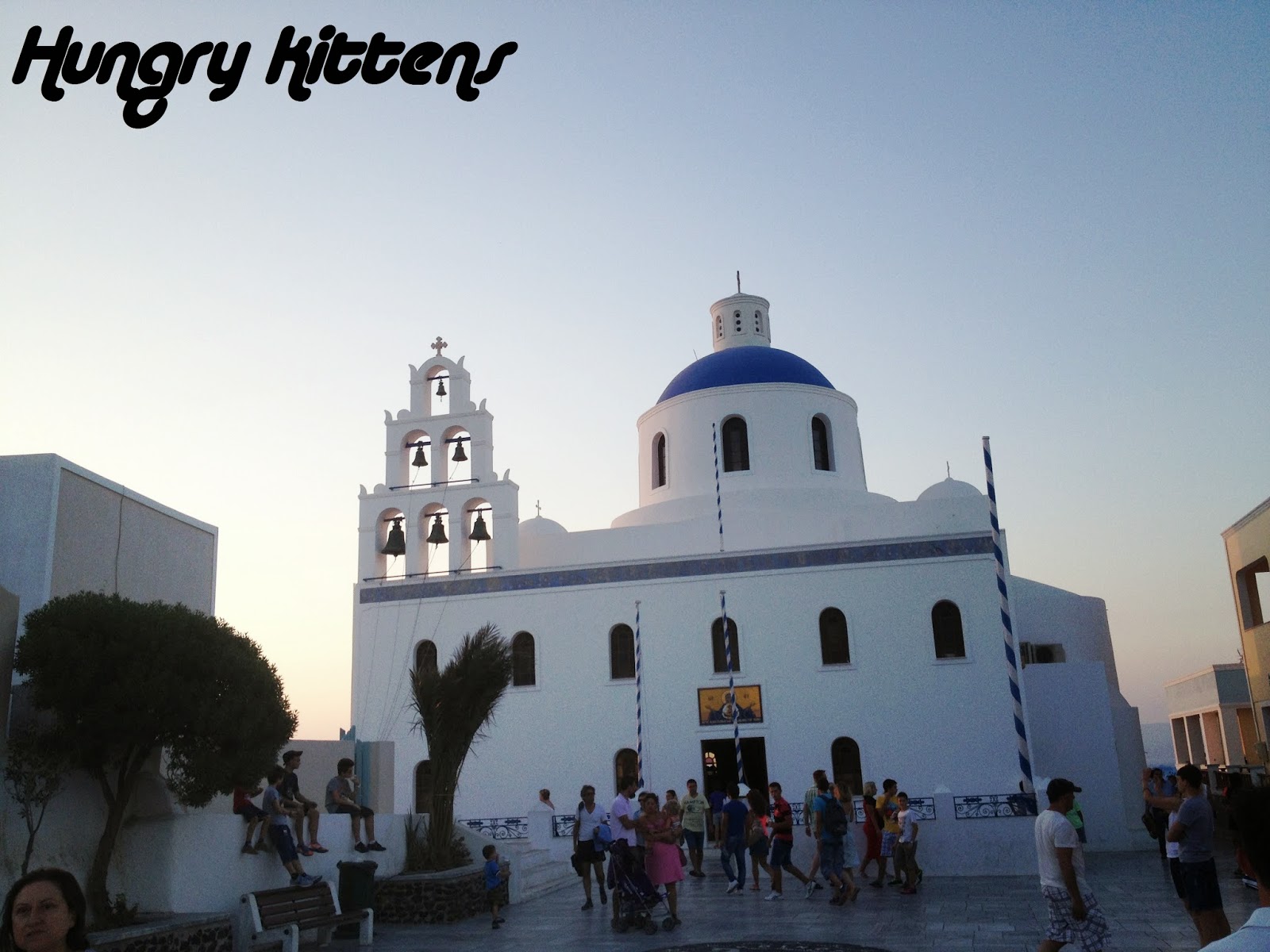 After Athens, we headed along to Santorini Island for the most anticipted part of my trip. First was a short stay in Thira (Fira) where we had dinner on the cliffside with amazing views (see first photo in this post).

We were then picked up by our next accomodation and dropped off at the Anastasis Suites, near Imerovigli. This was so good that it is blogged about separately, here. 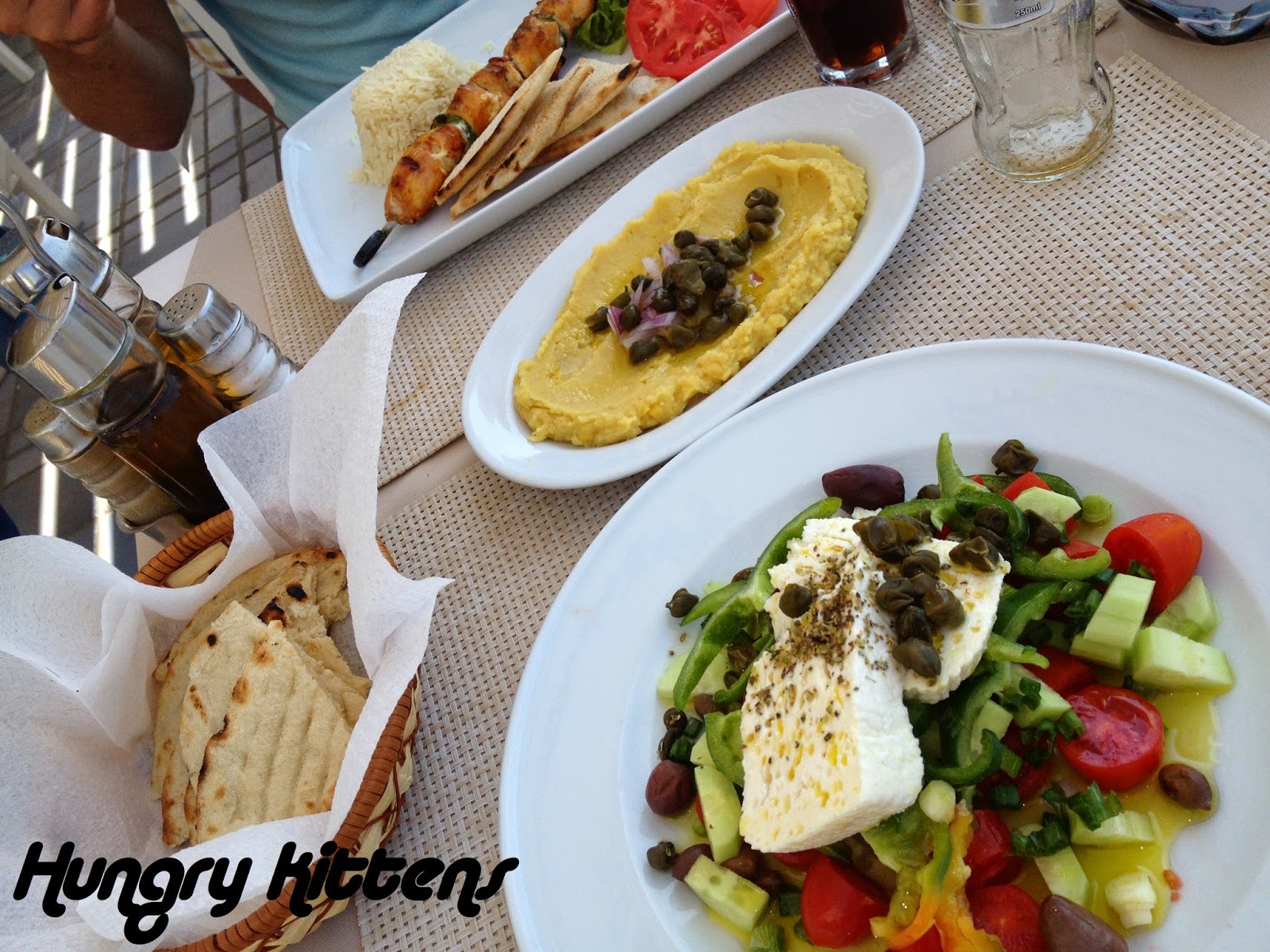 When we were staying at the Anastasis Suites, we rarely ventured out (if you read my review on that place, you'll see why). Nevertheless, one day, we forced ourselves to hike from Imerovigli to Oia for the famous Oia sunset. Meh... because it was so hyped up, everyone and I mean EVERYONE rushed to the one point from which the sunset could be enjoyed (and it was such a narrow point too) that it gave me the feeling of everything I DIDN'T want to experience on holiday i.e. touristy rushedness. Marc and I decided the sunsets from our balcony were much nicer and avoided the crowd. Oia was otherwise a nice town. 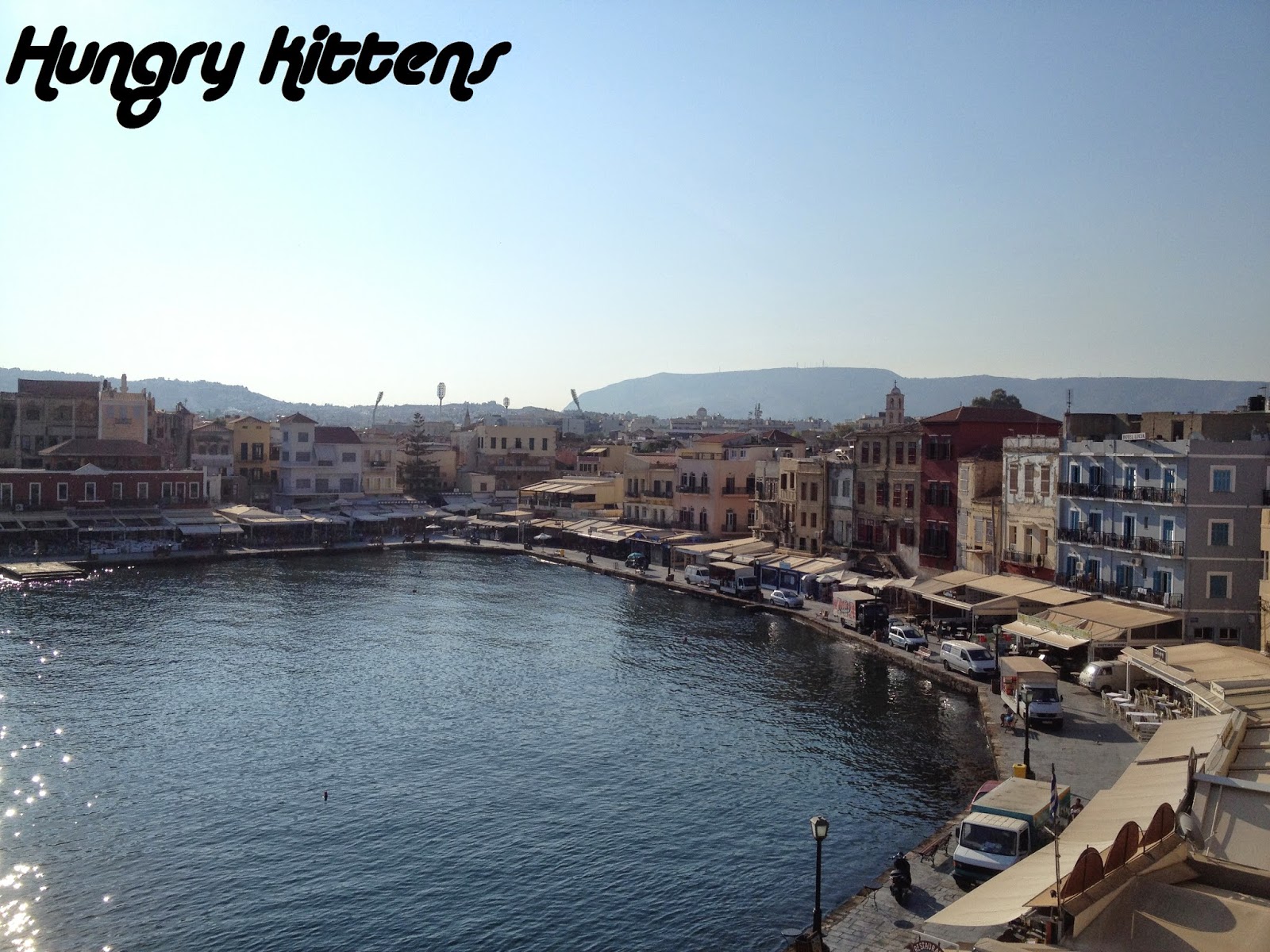 From Santorini, Marc and I caught the hydrofoil to Crete. This was one of those unavoidable transit issues where we spent ages on the ferry then even longer waiting for a bus to take us from Heraklion to Chania. Did I mention that the bus trip itself was long?

We ended up checking into our hotel in Chania at something ridiculous like 2am in the morning.

Chania itself was so classic and beautiful though. It's an interesting town and contains influences from its Venetian rule and Turkish rule. We did another walking tour through Chania. It was run by the same guys who did the Athens walking tour and it was good in that we got to wander around Chania but less good in that some of the foods we tried overlapped. This guide also didn't have the passion and vigour as our original Athens tour guide Despina. 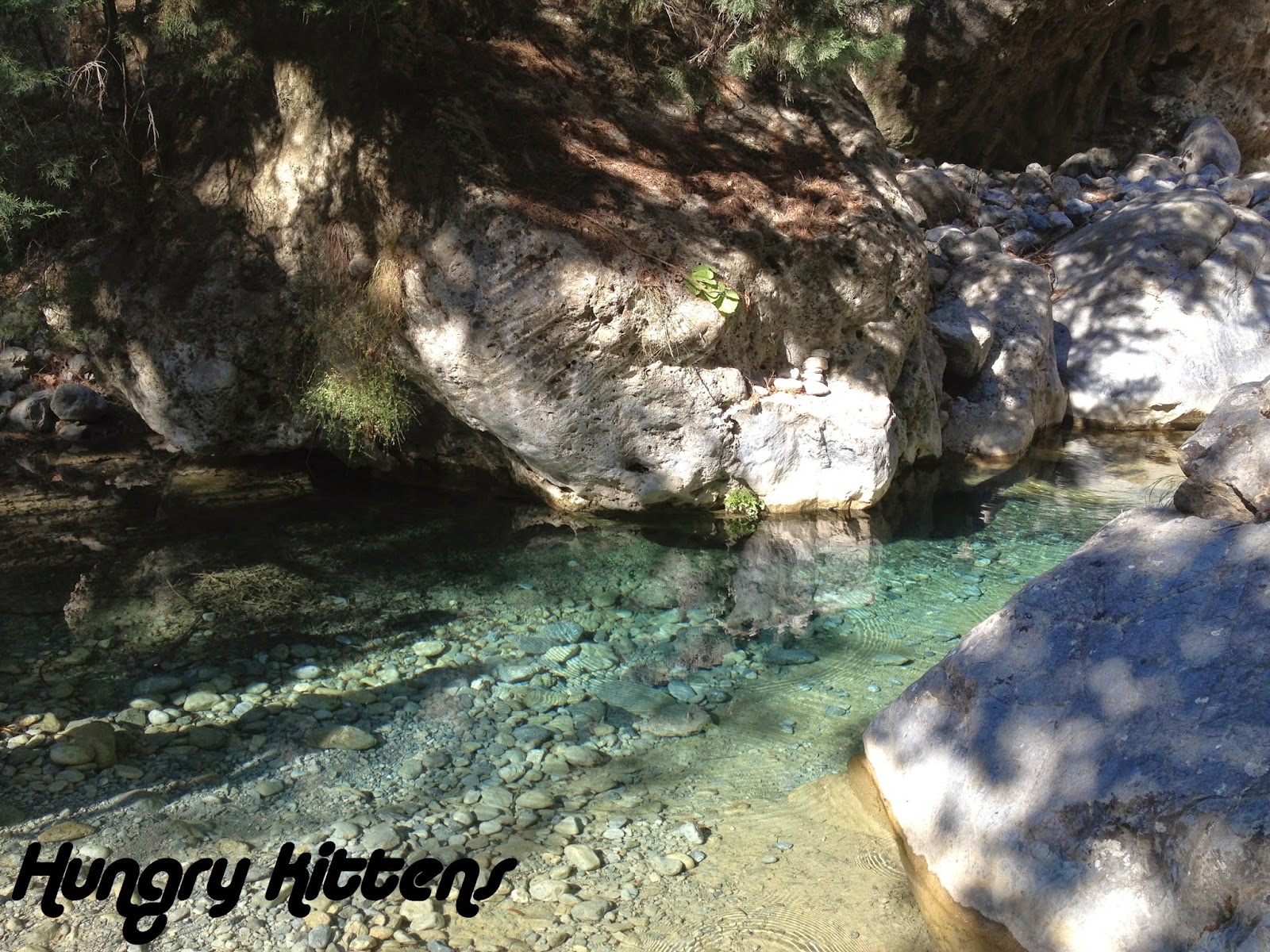 The main reason I wanted to go to Crete was to hike through the Samaria Gorge. I have a thing for gorges. We got up super early one day to get picked up by our bus before heading to the entrance of the gorge. I had a little sook because it was mostly all downhill and my shoes kept slipping on the pebbles. Wah wah. Anyway, it was kind of cool once we got to the bottom because you have that illusion of being enclosed by rock. 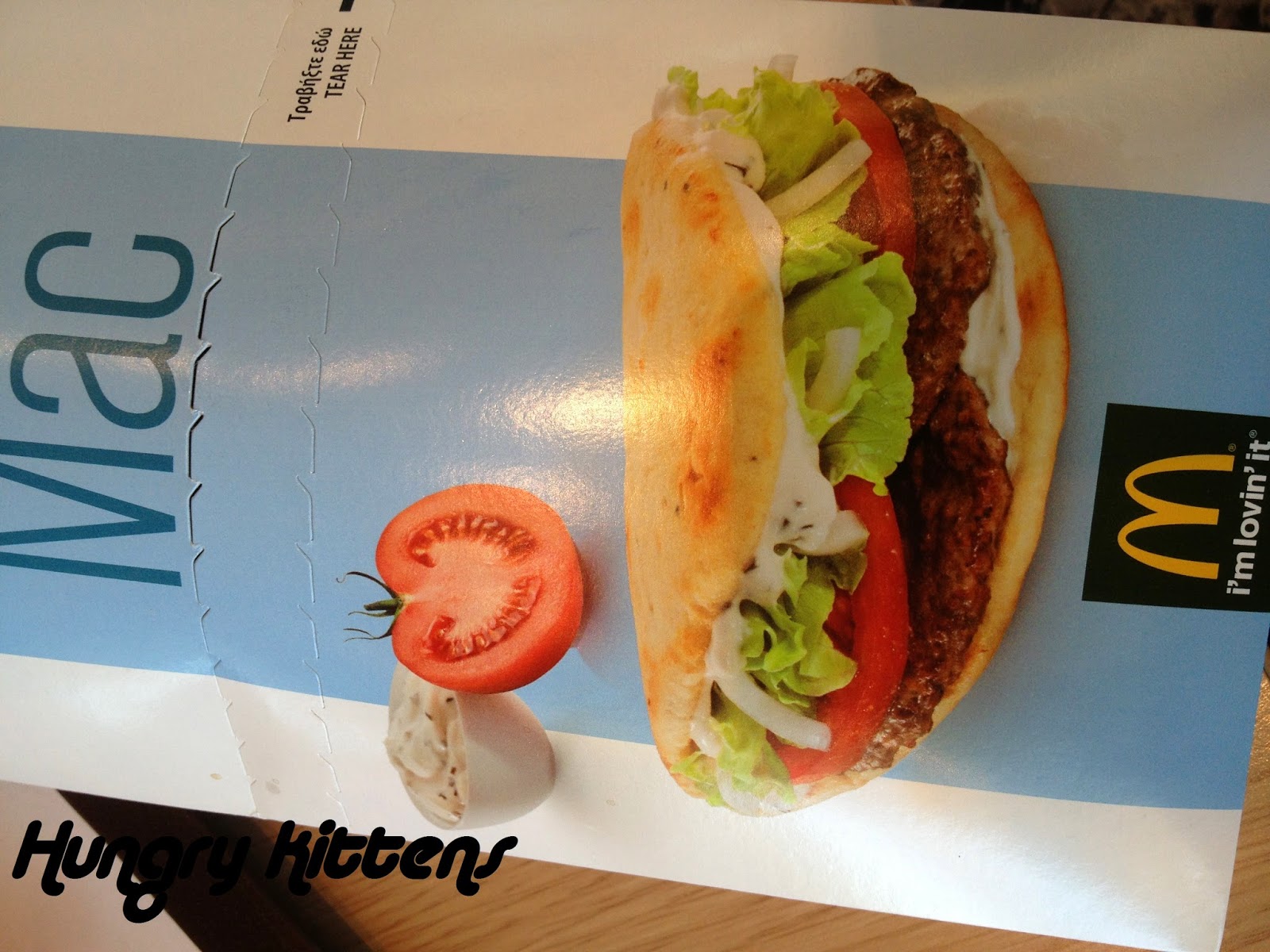