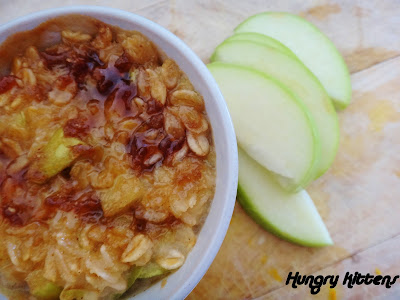 This post is about a sort of boring food item so I need to start with a story. I was just at the onset of my current cooking mood and all keen about what to bake/cook this week and the following week and the week after that and so on. I had a portion of turkey mince in the freezer and came up with the bright idea of making Donald Trump's turkey burgers. They're not actually 'his' but they're an item sold at his private club, Mar-a-Lago and Oprah raved about them in an episode of her show. I didn't end up making the burgers (a particular brand of pear chutney is one of the critical ingredients and I just couldn't find it... or any kind of pear chutney I could use as an alternative) but I did find some other recipes trawling through Oprah's site. The apple oatmeal brulee was one of them. I am like a horse when it comes to oats. Horses stereotypically go nuts for oats, right? I like oats especially in winter. Or when I'm sick. Or when I'm depressed. Or anytime really. Porridge is rad! I'm picky with oats. I don't eat instant oats. I need the traditional whole oats and I cook them slowly in milk (it has to be all milk, no water) with sultanas and dried apricots. Occasionally I'll add chopped up green apples or pears and a sprinkle of cinammon. I usually sweeten with honey. My biggest barrier in eating oat porridge is that milk is not a common feature in my fridge. I try to keep some long life stuff in the pantry but I prefer to use that for baking emergencies. I know that not having milk is inconceivable to most but I just don't drink it that much (my instant coffee only needs water) and I hate stuff going off. 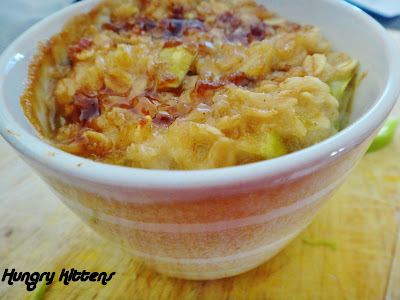 Nevertheless, the idea of an oatmeal brulee appealed to me. The theory is simple - you make some porridge (Oprah's recipe suggests cooking them in apple juice or apple cider but for me, it's gotta be milk all the way baby) and then pack it into little ramekins. Rather than stirring sugar or syrup through for sweetening, you layer some sugar on top and grill (Americans say 'broil') like the blazes to get a caramelized crunchy top. It's probably more for novelty than anything else but I'm not one to reject doing something for the fun of it.

I'll post up Oprah's recipe below even though her serving is for 4 and I only made enough for 2. My alterations are noted too.

1. In a medium sauce pan, bring the apple juice/cider/milk and apple chunks to the boil.
2. Add the oatmeal and cook for 3 minutes, until thick (I don't know what oatmeal she's using but mine takes a bit longer than that; you just stir and be the judge). 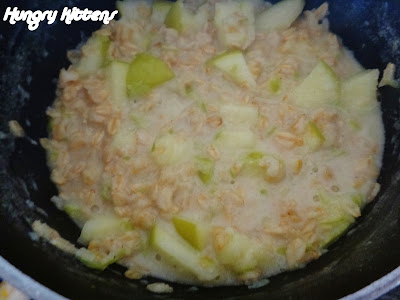 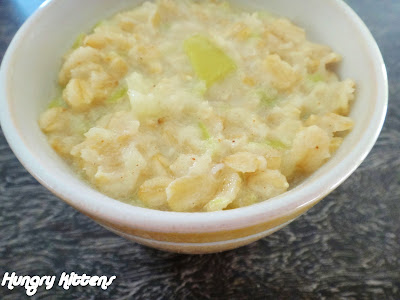 4. Sprinkle brown sugar evenly on top of each to form a top layer that covers the entire surface (I didn't put that much on... I tried to be 'good'). 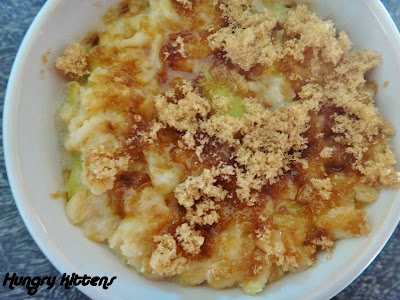 5. Heat your grill to high and set the rack to about 10-15cm from the top heat source.
6. Place the ramekins on a baking sheet, then onto the rack and grill until the brown sugar starts to bubble and darken. This should only take 1-3 minutes. 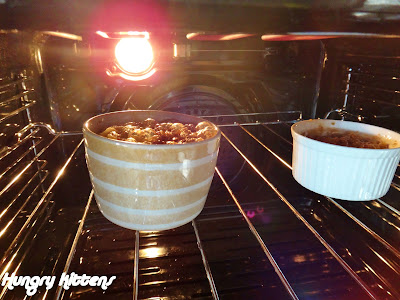 7. Remove the ramekins from the oven and wait for them to cool slightly. This allows the sugar top to set crunchy. Serve warm! 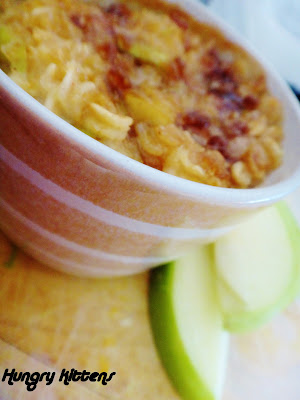 I thought these were a pretty nifty idea. It might be a good trick to getting kids to eat oats if they're feeling resiliant or perhaps a healthy alternative to creme brulee. I wouldn't go through that much trouble again just for the sake of it. It was amusing/cool to have the crunchy layer but honestly, I'm happy with my regular oats that don't require heating the oven and extra washing up.
Labels: Baking, Decadent Snacks, Home Cooking, Something Sweet, Stove Top, Vegetarian