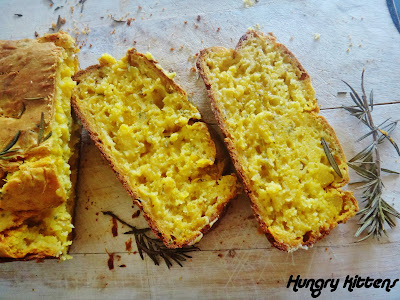 I went cucko about a month ago about bought all these vegetables that I didn't know what to do with. Pumpkin was one of them. I thought about just boiling the bejeebus out of it and making mash but I didn't want to eat pumpkin mash so I started scouting around for recipes that I could use it in. I found this recipe on Taste.com, which sounded perfect because it required 500g butternut pumpkin and that was EXACTLY what I had, once my pumpkin had been peeled and deseeded. 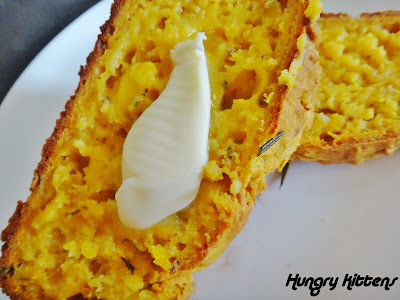 I'll put a warning out now that this pumpkin bread was probably one of my biggest baking failures this year. I have one that I can consider THE biggest failure (a lemon yoghurt cake that's refused to come out of the cake pan TWICE but at least was still edible) but this would be a close second. It just bloody wouldn't cook! They talk about measuring doneness by inserting a skewer and seeing it come out clean. Mine came out covered in pumpkin goo time after time after time. The original recipe says to bake it for 40-45 minutes. I must have had mine in there for close to 1.5hrs, if not 2 but it remained unchanged. Something similar happened to me with the sweet potato and zucchini loaf but not to this extent. It was past the point of being able to be described as 'deliciously moist' but better described as 'fail'.

I later read reviews and comments for the recipe, which I maybe should have done right at the start, and saw that many others had the same problem. It is recommended by such commenters to use 400g of butternut instead of 500g. Also, they hypothesize that the pumpkin is just too wet if you boil it so it works more predictably if you roast the pieces instead.

I haven't tried this recipe revised. I considered not posting the recipe at all, at least until I try it again and achieve success. I hated this bread when it first came out of the oven but as the days went by, I kept it refrigerated and microwaved it as I needed it and... it started tasting pretty good. I don't know if my expectations changed or standards lowered or if it truly improved in texture and flavor but by my last slice, I was sad to see it go.

I will put up the ORIGINAL recipe but STRONGLY RECOMMEND you click here and read through the comments and make the suggested alterations. Or, you can risk it ending up like mine and going through a potential hate/love cycle. If I ever reattempt this recipe with better results, I'll be updating/linking from this post.

1. Preheat the oven to 180 degrees Celsius. Grease and line the long ends of a 9cm deep, 9cm x 19cm (base) loaf pan.
2. Cook the pumpkin in a saucepan of boiling, salted water for about 8-10 minutes or until tender (others who have tried this recipe recommend only using 400g pumpkin and roasting till tender instead).
3. Transfer the pumpkin to a large bowl and mash with a fork until smooth. Cool for 5 minutes.
4. Add flour, fennel seeds, oregano, butter, milk and eggs. Season with salt and pepper. 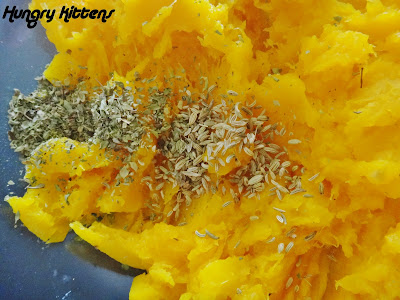 5. Spoon the mixture into the prepared pan and smooth the top with the back of a spoon or a spatula. Sprinkle over the rosemary leaves (I just lay my sprigs on top). 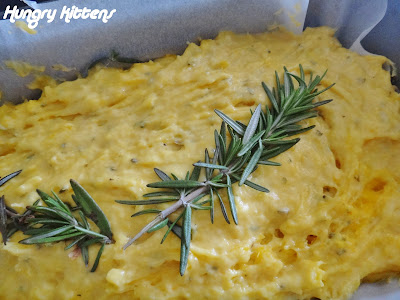 6. Bake for 40-45 minutes until an inserted skewer comes out clean. If the top starts to get too brown and the inside isn't cooked, layer a piece of foil over the top. Note: please ead everything I wrote above about how mine took close to 2 hours and still wasn't cooked through. 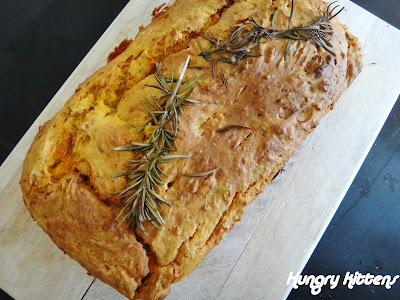 7. Stand in the pan for 5 minutes before turning the loaf out onto a wire rack to cool. Slice and serve with butter. 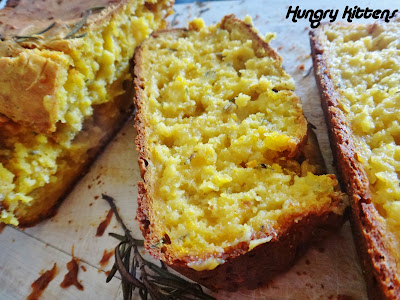 I've gone through most of my feedback of this recipe in the introduction of this post. It's unfortunate that I had so much trouble with it because it truly is an easy recipe to follow. Cook the pumpkin, mash it, then smush in all the other ingredients. Easy peasy. If only it worked. 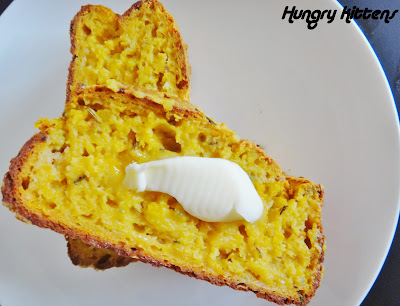 I have a gut feeling that reducing the quantity of pumpkin and changing the pumpkin cooking method is the key to making it work. The batter was probably just too moist for it to cook through. The loaf that I ended up with wasn't inedibly raw-tasting and floury. It just had a pumpkin pudding quality to the centre. Like I said at the start, after a while I stopped minding it and actually enjoyed it.

I like that the pumpkin bread is flavored by herbs. It is fine to eat on its own (especially with a dollop of butter) but is also great as a side for soup. I had it for breakfast, warming it up in the microwave for about 20 seconds before eating.
Labels: Baking, Breads and Buns, Decadent Snacks, Home Cooking, Savory, Vegetarian