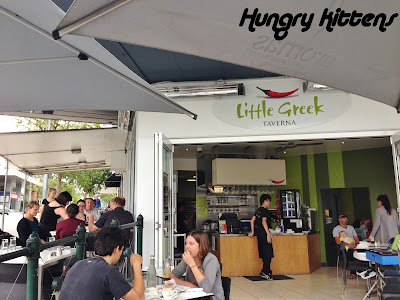 This restaurant has been on my radar, but elusive, for a couple of years. I've actually been once before back in 2010 (and blogged about it) but on that occasion, my friends and I only tried the wraps and a couple of sides. Whilst they were good, we weren't blown away. I received so many comments from readers insisting that there was more to Little Greek Taverna that I knew I had to go back. Online reviews were largely positive and everytime I walked past the restaurant, it was packed. Surely there was something I had missed on my visit. 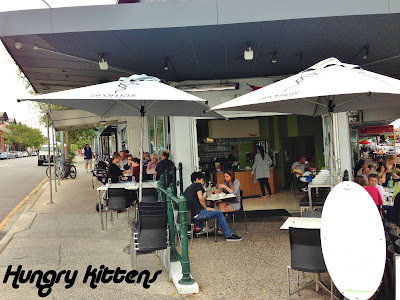 I tried to eat there at least 3 times after that and each time, was turned away because I didn't have a booking and they were full. On another occasion, I called to make a booking but they were already booked out. I'd almost given up when a sudden craving for Greek food stuck.


I'm a self-admitting victim of cravings. They strike randomly and constantly but don't usually last more than a day. I went to bed Saturday night with Greek food on my mind (specifically grilled lamb) and I was still in the mood come lunch time on Sunday. There was nothing for it but to appease.

We walked on over to Little Greek Taverna with the very realistic expectation that it may be full. Luckily I think the gloomy weather worked in my favor discouraging some other would-be diners because there were a couple of tables available. 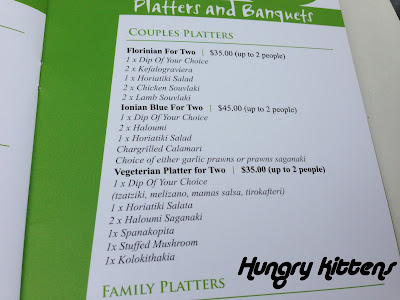 The menu contains loads of Greek dishes including starters, salads, sides, mains, wraps and platters. There were also some lunch specials available. I didn't want to make the same mistake as my first visit and besides, so many people had recommended the platters that we went for a large platter to share. There were 3 'couples platters' available featuring either meat, seafood or pastries (for vegetarians). We went for the Florinian platter. 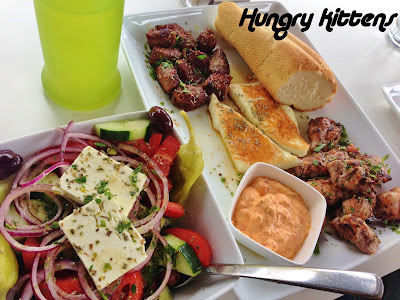 The platter comprised of exactly what I was in the mood for. We got to choose the dip and Marc and I agreed on the feta and spicy capsicum. We were given the option of ordering pita bread (extra cost) but we decided to stick with the regular bread provided in the platter because we figured we had enough on our plates (literally). The dip was really tasty and secretly, I regret not getting the pita to maximize the enjoyment of the dip. 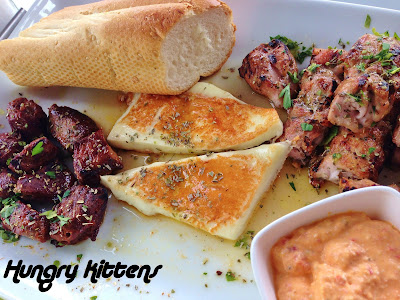 Chicken and lamb souvlai, kefalograviera and dip with bread

The chicken and lamb souvlaki were nice and flavorsome. The lamb was a shade overcooked but the chicken was bang on and very juicy. I really liked the kefalograviera (try saying that out loud!), which was a fried cheese similar to haloumi but stronger and saltier. 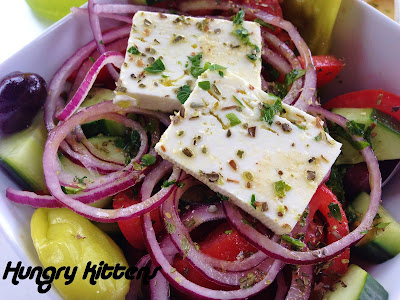 The greek salad was huge. I like greek salad in general and Marc hates tomatoes and olives so it was a given that I would be devouring most of this. What surprised me was the excellent quality of tomatoes. I'm not generally a huge tomato connoiseur but I have to say these were outstanding.

After this meal at Little Greek Taverna, I am starting to see what the fuss is about. The restaurant delivers great quality Greek food in a way that Greek food is meant to be enjoyed: plentiful and with lots of variety. The service was friendly and efficient. I only wish they had a larger dining area so it was less competitive to eat there.