I'd been interested in Ole Restaurant since it first opened. There was quite a bit of buzz online but I didn't cross paths with the restaurant so I didn't get a chance to see for myself.  I tried suggesting it a couple of times while I was out in South Bank Parklands but my friends didn't bait. I took matters into my own hands and headed to Ole Restaurant for solo breakfast one morning. This was a couple of months ago. More recently, Nina and I were planning on a lunch catch up and Ole Restaurant happened to be on her 'to try' list so we went along with it. 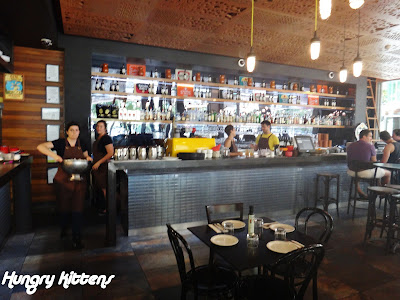 I'll start with my breakfast assessment. This was also my first impression of Ole Restaurant. I liked that openness, bar stools and sunny decor (the pops of yellow and metal lattice ceiling are lovely). It was fairly quiet when I got there but I am known for early roaming so the restaurant had probably just opened. 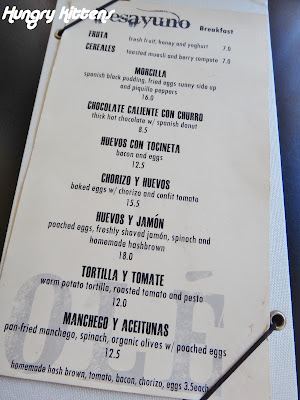 The breakfast menu isn't as extensive as most cafes that I go to for breakfast but I suppose Ole Restaurant focuses on the lunch and dinner service so that's fair enough. I liked that the breakfast options are far from conventional. There is a distinct Spanish theme with chorizo, jamon and even churros featured. I will point out that there isn't a lot to choose from if you're after something light. 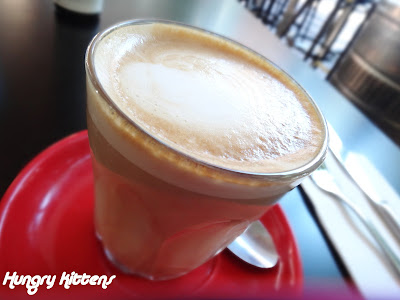 I went for a cup of coffee and the fried manchego. The coffee was pretty good. 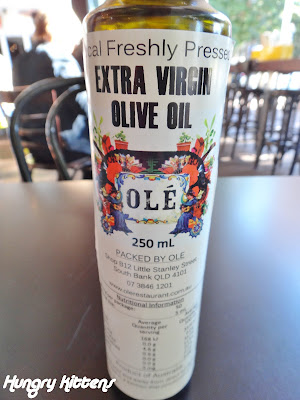 I noticed that Ole Restaurant had its own olive oil on the table. Unfortunately I didn't get a chance to use it but I was curious. 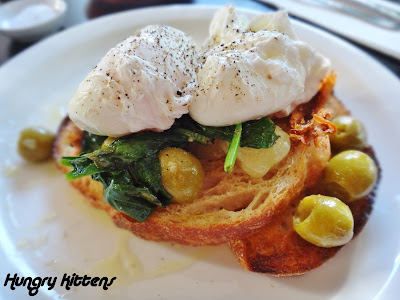 Manchego is a type of cheese and in this dish, it was served on 2 slices of toast with wilted spinach, poached eggs and green olives. 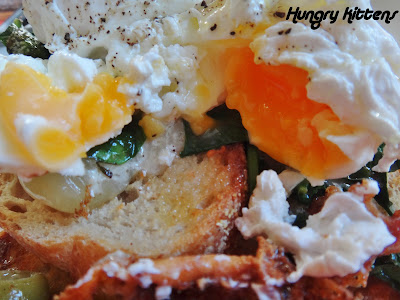 Close-up of poached eggs (overcooked in this case)

If you can imagine, fried cheese and eggs is quite heavy and a bit much for me at breakfast time. What really helped cut through the fatiness was the green olives. The pickled acidity brought the whole dish together. 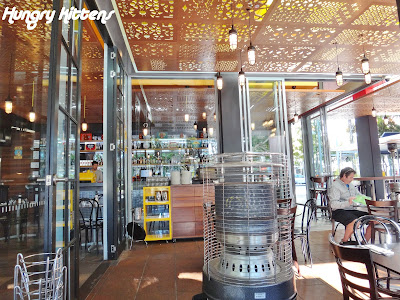 When Nina and I ended up here for lunch, enough time had passed since my breakfast visit that it was a new season in Brisbane and it was boiling hot. We took up seats perched on their long table and ordered a jug of red wine sangria to start with. 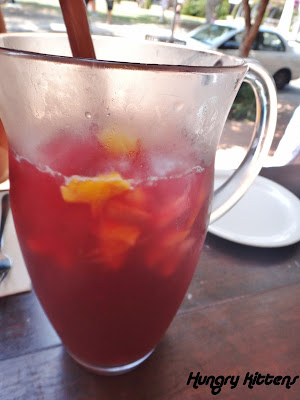 Let me just tell you: as the months get warmer yet, there is little in this world more refreshing and blissful than an icy jug of sangria dripping condensation before your eyes. We lapped this up by the glassful and cherished how wonderful life was. 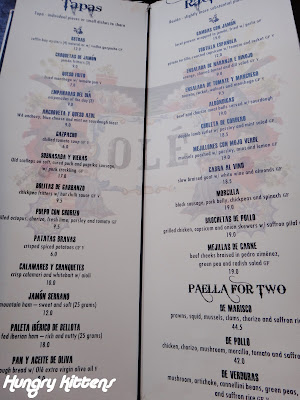 Contrasting to the breakfast menu, Ole Restaurant has a vast array of tapas and main offerings. Nina was right on it and made a number of fabulous suggestions. We ended up with a couple of tapas (smaller dishes) and a couple of raciones (larger dishes) to share. 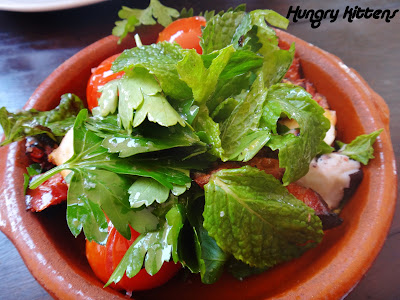 The first dish we tried was the grilled octopus and chorizo. Nina remarked that she didn't expect it to be so salad-like. There was a liberal amount of fresh herb garnishing. I liked the octopus. It was 'just' cooked to the point where any less heat and it would have been raw. I suppose they were really cautious not to make it tough and chewy and it worked. The chorizo was a tad over but it didn't affect the flavor. We thought the mint was a nice accompaniment but the parsley felt out of place. 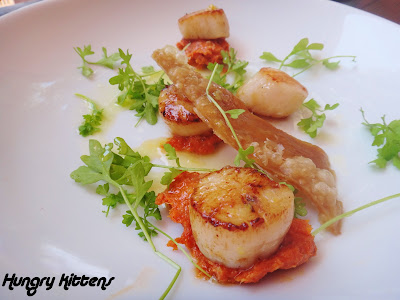 I really enjoyed the scallops. Each one was fat, sweet and juicy and served on something that we had to recheck the menu to identify. It turned out to be the cured pork sausage. The texture of the sausage was soft yet chewy. It was strange but I liked it. It was also exceptionally salty and impossible to eat on its own but complimented the scallops brilliantly. The pork crackling was a disappointment. It wasn't brittle and crunchy and honestly, just served as decoration. 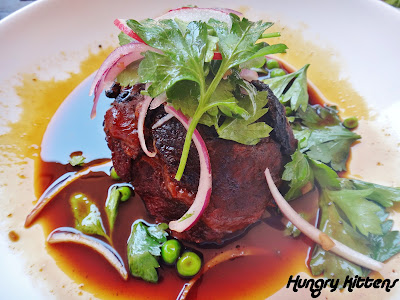 The braised beef cheeks were remarkably tender. Nina wasn't sold on the flavor though. She didn't think this dish was anything special. 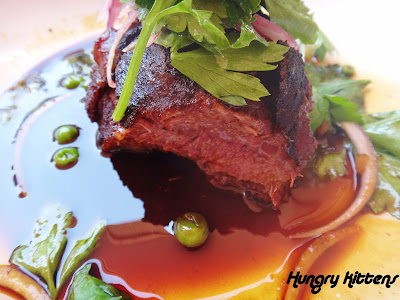 I quite liked it but I can see her point. There are lots of Asian-style dishes that feature meat similar to this but with more flair. 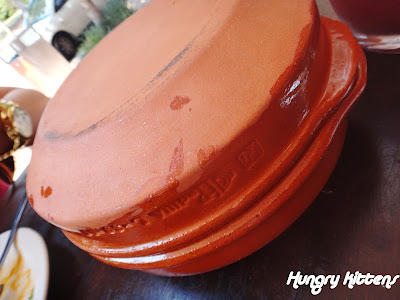 Our final dish was the mussels. They were served in a broad clay pot. Lifting the lid revealed a nice heap of mussels. What I loved about this dish was the sauce. I've tried mussel dishes in a number of restaurants and they tend to use the same types of sauces. Even though this one was just a simple blend of parsley, mint and lemon, it stood out. Maybe it's the mint. 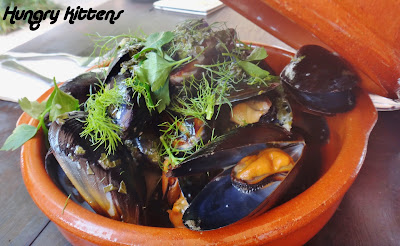 In any case, the sauce was delicious but I wish the dish was served with some bread to soak the remaining sauce up with. This was Nina's favorite and probably mine too.

We enjoyed our lunch feast at Ole Restaurant. Overall the food was fresh and full of flavor and well-executed. I much prefer the lunch and dinner menu with tapas et al to their breakfast menu, mostly because I can't handle those big hearty protein-ladden dishes at breakfast time. The sangria was fabulous and if nothing else, I would recommend going there just for that and basking in the vibrant atmosphere of South Bank Parklands.