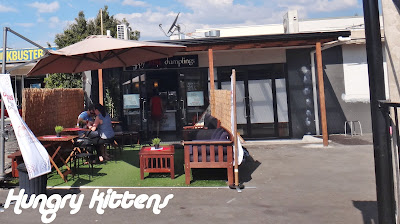 Don't judge a book by its cover? I find it hard not to get reeled in by attractive novels. The same applies for irresistably cute eatery titles. With a name like 'Happy Little Dumplings' and the accompanying cartoons (have you BEEN to their website?), they appealed to my little girl within. I couldn't wait to try the dumplings and feel the love and happiness and rainbows for myself. 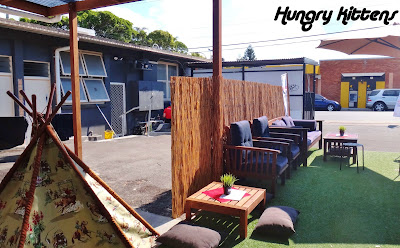 So insistent was my need to introduce these dumplings into our lives that I managed to persuade Marc to come to Bulimba with me for late lunch. Most of you would have no clue as to how significant that is. Marc is someone who lives inner city and thinks Carindale (zone 3, for those familiar with public transport) is interstate and Toowoomba (where I live) is akin to being in another country. He rarely ventures beyond his immediate walking circle and anything requiring a car is a Big Deal.

Happy Little Dumplings do have a branch on James Street in the Valley too but they close earlier and we were having a late lunch so we didn't want to risk being closed on. That would definitely ruin the happiness.


Parking around Oxfort Street is a pain and we ended up on a side street somewhere in the distance. When we got back to the main street, it was a tedious task trying to find street numbers to hone in on where Happy Little Dumplings was supposed to be. Have you ever noticed that NO shops or buildings or even, residential houses at times, will display street numbers when you need them to? Had it not been for a sign promising yum cha and pointing us in the right direction, we would have missed HLD completely. It isn't right on Oxfort Street... you have to turn into a little shopping mall. 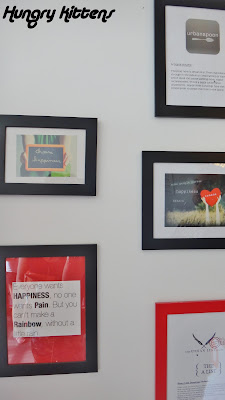 Once we turned, I found myself facing one of the strangest food store fronts I've ever seen. It reminded me of Flamingo Cafe, which I've only been to once nearly 2 years ago now (NFI if it's still around) but along that vein, there were kooky patches of artificial grass and a random teepee. I would summarize the decor as bali hut cross Asian stationary store cross kindergarten play pen. It was bizarre but not in a bad way. 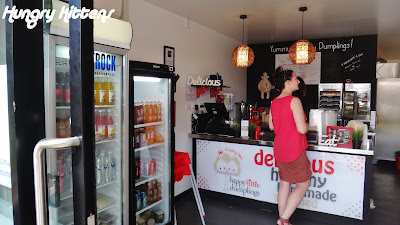 The eatery itself is tiny. All the dumplings are premade and stored in a little humid warming box (I don't know what the proper name is but 'opposite-of-fridge' is what I think of it as). As you select from the menu, you can get them takeaway (i.e. put into plastic boxes) or dine in (i.e. put onto a plate). We ordered one each of the gourmet dumplings plus a prawn har gow and BBQ pork bun. There were also fresh rice paper rolls and we picked up a box of 2 of those. 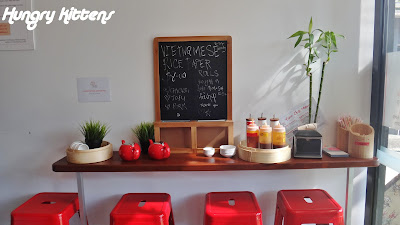 There is a cutlery and saucing station in the corner. It was really cute but I'm not sure why bar stools are set up there. Is it so you can sit down and really take your time selecting sauces and ensuring you have the right amount of napkins?

We took up one of the few seats outside. We were there during an off-peak dining slot around 3pm ish... I don't know how HLD would do during peak times. There aren't a lot of sitting areas. Our seats came with a table. It may have been the only proper table there. I did notice some comfy looking couches but they had low coffee tables next to them, which aren't ideal for dumpling eating. Well, maybe if you're really good with your chopsticks you'll do alright. I'm a messy eater. I need a table. To me, the set-up is quirky but unpractical. Then again, the focus could be on takeaway orders. 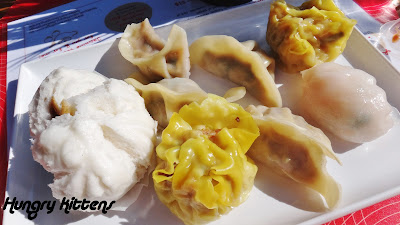 With regards to the dumplings themselves, Marc started munching away on his right away. We were sharing and I asked which he'd been eating. He didn't really know. 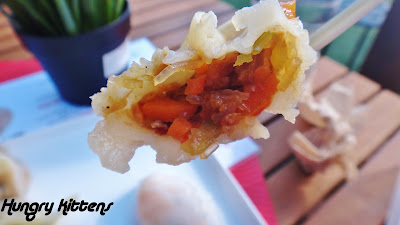 Once I started trying them, I sort of got his point. The fillings aren't that distinguishable. The gyoza-shaped ones were a bit dry and I found the skin to be on the thick side. The shu-mai were our favorite. The fillings were really juicy and delicious and the skin was softer too. 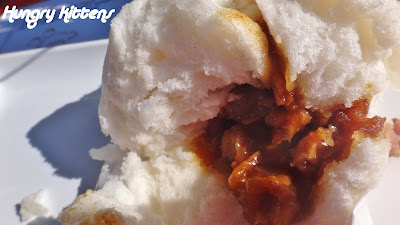 The BBQ pork bun was average in that it tasted good but wasn't anything special. I would have liked a higher filling to bun ratio. The bun itself was light and fluffy but I wanted more of that delicious sweet pork filling. 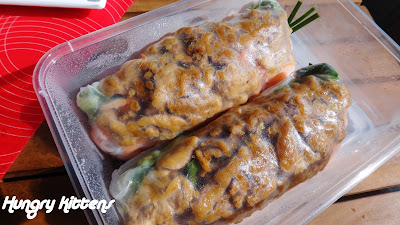 We were astounded by how huge the rice paper rolls were. They were physically heavy to hold. 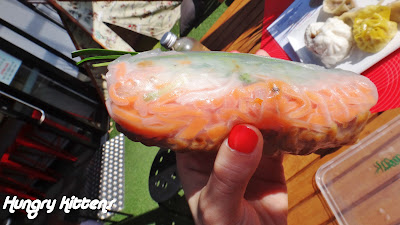 When I DIY rice paper rolls, I put the tiniest amount of filling in to try and increase my chance of not bursting the whole package. These must be made of heavy duty rice paper because they were chockas with filling and not a single tear was present in the wrapping. Or, the person wrapping them was much more skilled than me at rice paper rolling (very likely). 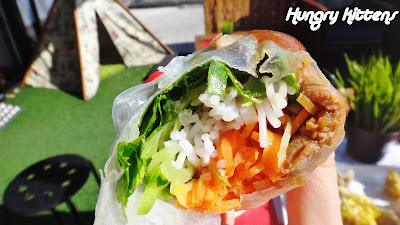 The rice paper rolls were filled with pork, rice noodles, fresh lettuce, carrot and Asian herbs. They were very fresh-tasting and the pork was of the Chinese BBQ pork variety, rather than marinated Vietnamese-style. I did like these and they were surprisingly filling. 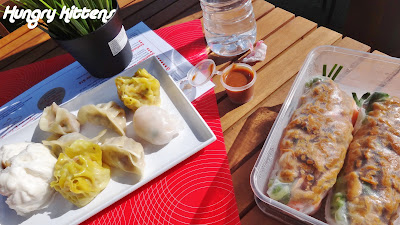 Happy Little Dumplings was an interesting experience. It's worth visiting just to see the shop front. The dumplings tasted OK; not mindblowingly gourmet but I like the idea behind them. They are a healthy fast food option, which appeals to me because I'm a huge advocate of not being stuck eating junk just because you're short on time. If I lived locally, I can definitely see myself buying boxes takeaway for dinner. The shu-mai were the best tasting and I thought the rice paper rolls were good too.